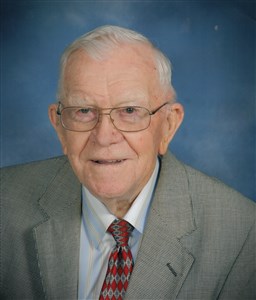 Visitation will be from 2—4p.m. on Sunday, September 4, 2016 at the Crossroads Chapel, 1049 JC Parkway, Bloomington, IL 61705. Fred’s service will be on Monday, September 5, 2016 at the church at 10:00a.m. with pastor Mark Wallace celebrating. Interment will be at Riverside Cemetery, Saybrook, IL following the service at the church. Memorial contributions may be mailed to the Crossroads Chapel, 1049 JC Parkway, Bloomington, IL 61705; or to Heritage Health, 509 North Adelaide, Normal, IL 61761, in memory of Fred. Calvert & Metzler Memorial Home has been entrusted with the arrangements.

Fred was born on September 20, 1922, the son of Murfin and Elsie Powell Belcher. He married Jessie Marie Cozad on November 4, 1942; she preceded him in death.

Rev. Belcher served as a minister of God for over thirty years at the Downs United Methodist Church. After retiring in 1991 from the church, he continued to serve his faith and the Lord at the Crossroads Chapel as well at OSF. St. Joseph Medical Center, Bloomington, IL.