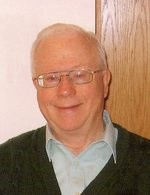 Dr. Mason graduated from Rochester Senior High School in 1946. He received a Bachelor’s degree in chemistry from Wesleyan University, Middletown, Connecticut in 1950, earned a PhD in biochemistry from the University of Illinois, Champaign, Illinois in 1953 and changed direction by earning a Bachelor of Sacred Theology from Wesley Theological Seminary, Washington, DC in 1962.

Dr. Mason had two careers, first as a biochemist at National Institutes of Health, Bethesda, Maryland, and at the USDA Laboratory, Peoria, Illinois. After being ordained by the United Methodist Church in 1962, he served as pastor for 33 years with churches in Maryland, New Mexico, and Illinois.

A memorial service will be held in the Menno Haven Chambers Pointe (Penn Hall) Chapel at 11:00 AM on Friday, September 9, with Rev. Lori Witmer and Rev. Rachel Wong officiating. Memorials may be given to the Menno Haven Benevolent Fund or UMCOR (United Methodist Committee On Relief).