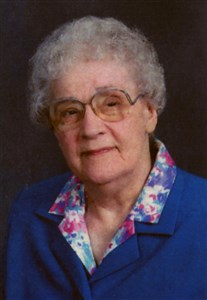 Rosemary Dehus Hague, age 101 of Lawrenceville, passed away Thursday, December 18, 2014 in Lawrenceville. She was born in Wheeling, WV on April 20, 1913 to Clarence Conrad Dehus and his wife Katharine (Rost) Dehus. Rosemary married Virgil Hague in June of 1936, and he preceded her in death in August of 1996.

Rosemary was very active in mission work alongside her husband, Virgil. He was pastor for many churches, including, Robinson Otterbein United Methodist and Pleasant Hill United Methodist, Northeast of Sumner. They traveled all over the United States raising money for the McCurdy Schools of Espanola, New Mexico, before retiring in Lawrenceville.

She was preceded in death by her parents, Clarence and Katharine Debus, and her husband, Virgil Hague.

A funeral service for Rosemary Hague will be held at 11:00 a.m. on Saturday, December 27, 2014 at the United Methodist Village (Main Campus) Susannah Wesley Parlor. A visitation will be held in the Parlor from 9:00 a.m. until service time at 11:00 a.m. Burial will take place in Pleasant Hill Cemetery, Petty Township. Cunningham-Young Funeral Home in Lawrenceville is handling all arrangements.

In lieu of flowers, contributions can be made to the United Methodist Village­Activities Department or to the Lawrenceville Senior Citizens. Online condolences can be sent to the family at www.cunninghamfuneralhomes.com