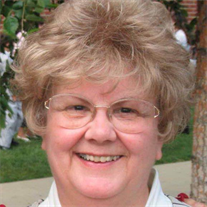 Joyce Marie Parris Powell, 84, passed away on September 14, 2016 at Hospice Home of High Point. Joyce was born in 1932 to James and Gladys (Riggle) Parris of Clarksville, Indiana. Joyce’s life began with an exciting adventure, when in 1937, she and her family escaped from their house in a boat during the great Ohio River flood. As a teenager she committed her life to Christ and remained a faithful follower. She graduated from Jeffersonville High School in 1950 and shortly thereafter married the Reverend Mode Powell of Lawrenceville, Illinois. Together they lived in a camper for five years while Mode was a traveling Methodist evangelist. Later they raised their three children in various parsonages in the Southern Illinois conference of the United Methodist Church. Joyce returned to school, earning a bachelor's and master's degree from Southern Illinois University. She went on to teach reading and literacy to children and adults in Floyd County Schools, Indiana, and later, The Piedmont School in High Point, North Carolina. Joyce enjoyed
writing and became a published author. She also enjoyed attending the theatre, playing games with her Westchester Village friends, eating bourbon balls, and watching “The Lawrence Welk Show.” Joyce was preceded in death by her parents, her husband, her sister and her brother-in-law, Doris and Bert Swearingen. She is survived by her sister Diana Parris (Cecil) Johnson of Jeffersonville, Indiana; children, Nancy Metzner, Robert (Janet) Powell, and Philip (Roberta) Powell, all of High Point, North Carolina; grandchildren, Timmy Metzner, Micah Metzner (Jeff) Noe, and Morgan Powell; great grandchild, Madilyn Marie Noe; as well as many beloved nieces and nephews in Indiana and across the country.

Funeral service will be held at 3:00 p.m. Saturday in the chapel of the Cumby Family Funeral Service in High Point with Rev. Roland Cavanaugh officiating. Interment will follow at Deep River Friends Meeting Cemetery. Visitation will be from 5:30-7:30 p.m. Friday and also one hour before the service, both at the funeral home. Memorials may be directed to World Vision International, P.O. Box 9716 Federal Way, WA 98063.

Just two weeks ago, when celebrating her 84th birthday, her children asked if she had any words of wisdom to bestow. She paused, and then said with a wink, “Take good care of your mother and all will be well.” The room burst into laughter. We love you, Mom.