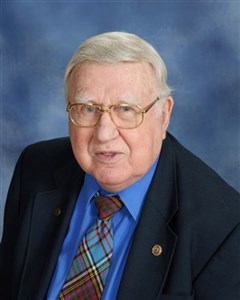 He was born at the family farm home on March 29, 1929 near Albion, IL in Edwards County, IL, a son of Frank C. and Harriett (Holt) Michels .

He was the youngest of five sons: Vernon, Virgil, James, and Allen. All brothers preceded him in death.

He served the Southern Illinois Conference in various agencies: Board of Trustees, (Treasurer); Board Of Pensions, Commission on Minimum Salary, (Treasurer & Chairman); Building and location Committees in three districts; Committee on District Superintendency; District Youth Director; Camp Dean, Little Grassy; Conference Statistician; Conference  Chairman On Pastoral Counseling and Care Committee in the planning stage, Board of Directors for United Methodist Village, Lawrenceville, IL and Alton Memorial Hospital in Alton, both in Illinois.

Believing a pastor should be involved in the community, he chose Rotary as the one service. He served in every local club office. He shared Rotary in New Athens, Newton, Sparta, Jerseyville, Carmi, and Litchfield. In retirement serving four years as Assistant Governor, being a “pioneer” the first told hold that office in the pilot year. He was awarded honors: Rotarian of the Year, Hall of Honor, and holds six Paul Harris Awards. Mike refused three times the nomination of being District Governor. He never missed a meeting since first joining, having recorded 55 years of perfect attendance.

While not volunteering, Mike enjoyed ministering with the children of the church and enjoyed woodworking, gardening, and landscaping.

He was preceded in death by his parents, son, Stephen Link Michels and his brothers.

Funeral Services will be held Friday, October 14, 2016 at 11:00 am at St. Timothy United Methodist Church in Litchfield, IL. Rev. James Tinzmann will officiate. Visitation will be from 10:00 until service time in the church. Burial will take place Saturday, October 15, 2016 at 11:00 A.M. at the Mt. Zion Cemetery in Albion, IL.

For more information or to sign the online guestbook, please visit www.litchfieldffs.com