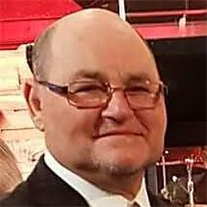 Robert “Pastor Bob” Lee Shook, 70, of Marion, IL, passed away October 6, 2016 at Heartland Regional Medical Center, in Marion. He was born September 28, 1946 in St. Louis, the son of Lester Shook and Selma (Helbig) Shook. He married Susan (Thompson) Shook on December 10, 1988 and she survives of Marion. Mr. Shook is survived by four children, Deana and Gary Kelly, of Du Quoin, IL, Eric and Robin Shook, of Texico, IL, Stephanie Shook, of Centralia, IL and Mathew and Gina Shook, of Centralia, IL; grandchildren Jordan Kelly, Kailah Kelly, Levi Shook, Lyra Shook, Carter Shook, Cassidy Shook and Dirk Robert Brewer; brothers and sisters Jack and Mavis Shook, of Springfield, IL, Terri and Sal Chavez, of St. Louis and Barbara Ann and Bill Wells, of Salem, IL. He was preceded in death by his parents. Mr. Shook was a Methodist minister, for 48 years, serving churches in the Illinois Great Rivers Conference. Funeral services will be held at 1 p.m. on Saturday, October 8, 2016 at First United Methodist Church, in Sesser. Visitation will be at the church from 10 a.m. until the time of the service at 1 p.m. Burial will be at Maple Hill Cemetery. In lieu of flowers donations can be made to the Preacher’s Aide Society and will be accepted at the church and also the funeral home. Brayfield-Gilbert Funeral Home, in Sesser, is in charge of arrangements.