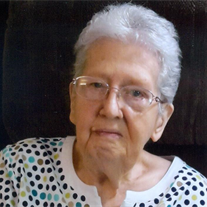 Thelma June Cummins, 93, of Lawrenceville, Illinois, passed away Sunday, October 30, 2016 at the United Methodist Village North Campus in Lawrenceville, Illinois. She was born June 7, 1923 in Crawford County, Illinois, the daughter of Herman Harrison and Leona (Stevenson) Rigg. She married Warren Grant Cummins on June 14, 1941 and he preceded her in death on June 20, 1999.

Thelma was a homemaker and a member of the United Methodist Church in Pinkstaff.

Preceding her in death were her parents; her husband; brothers, DeLoe Rigg and Herbert Rigg; and sister, Helen Crouch.

Funeral services will be Friday, November 4, 2016 at 2:00 PM at the Emmons-Macey & Steffey Funeral Home. Visitation will be Friday from 12:00 PM until 2:00 PM at the funeral home. Burial will be in the Lawrenceville City Cemetery. In lieu of flowers, memorial donations in Thelma’s memory may be made to United Methodist Church in Pinkstaff or National Parkinson Association.