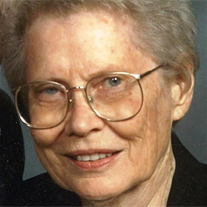 Delta Mae Milhouse, 89, of Petersburg, passed away on Sunday, November 6, 2016 at Sunny Acres Nursing Home. Delta was born on February 24, 1927 in McAllen, Texas, the daughter of the late Mark and Mabel (Stanton) Burnett. Delta married Edward Milhouse in Chicago on August 25, 1957 they celebrated 61 years of marriage until he preceded her in death on September 8, 2012. Delta attended Kendall College, went on to graduate from Northwestern University, and earned her teaching certificate from Olivet Nazarene University. She taught in the Petersburg area for 31 years before she retired from the PORTA School District. Delta was a member of Petersburg United Methodist Church, she enjoyed traveling on mission trips with the NOMADS, quilting, gardening, but she especially enjoyed spending as much time with her grandchildren and great-grandchildren as possible.

A funeral service officiated by Rev. John Vidakovich will be held on Sunday, November 13, at 2 p.m. at Petersburg United Methodist Church. The family will receive guests from 1 p.m. until the time of service. Interment will follow at Oakland Cemetery.