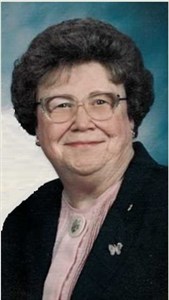 Earline J. Michels, 84, of Litchfield, IL, passed away on Monday, November 28, 2016 at 11:20 A.M. at Heritage Health Therapy and Senior Care in Litchfield, IL.
Earline was born on December 10, 1931 in Phillipstown, IL, a daughter of the late Earl Sanders and Faye (Hewitt) Sanders Clark.
Earline graduated from Crossville High School and attended McKendree College in Lebanon, IL.
Earline married Rev. Francis T. Michels on August 29, 1952 in Phillipstown, IL and he preceded her in death on October 10, 2016.
Mrs. Michels was a homemaker and a member of the St. Timothy United Methodist Church in Litchfield where she actively enjoyed teaching Sunday school and additionally enjoyed singing in the choir. Earline was also active in the United Methodist Women where she enjoyed fellowship, studies, and crafts. She was a past member of the Litchfield Woman’s Club. Dear to her heart, was her time spent volunteering with the St. Francis Hospital Auxiliary in Litchfield.
Earline loved being a minister’s wife for 40 years as she supported her husband, Mike, in all his ministerial duties across Southern Illinois.
She was an avid reader and was an accomplished seamstress.
Earline is survived by her:
daughter,                            Linda (Robert) Noland of Maryville, IL
granddaughters,                Katie (Kevin) Devany of Troy, IL
Leanne Noland of Clinton, IL
Great-granddaughter,       Claire Devany of Troy, IL
She was preceded in death by her parents, husband, and son, Stephen Michels, 2 brothers, Charles Franklin & Norman Wesley Sanders.
Funeral Services will be held Friday, December 2, 2016 at 10:00 A.M. at St. Timothy United Methodist Church in Litchfield, IL. Pastor Jim Tinzmann will officiate. Visitation will be from 9:00 A.M. until time of service at the church. Grave side services will commence at 3:30 P.M. at Mt. Zion Cemetery in Albion, IL. The family suggests memorials be directed to the Preachers Aid Society and Benefit Fund P.O. 19207 Springfield, IL 62794-9207