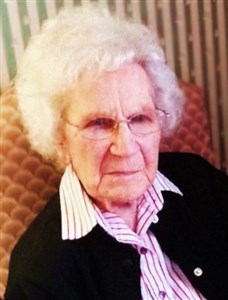 Marie Connett, age 99 years, of Flora, Illinois, passed away Saturday, January 10, 2015 in Flora.
She was born Marie Lucille Block on May 29, 1915 in East St Louis, IL to Frederick and Frances (Craft) Block. The Crafts’ were longtime residents of Flora.
Marie met her future husband, James Aaron Connett while attending McKendree College in Lebanon, IL.  During college, she was the secretary to the college dean.   James and Marie were married in 1939 in Effingham, IL by his father, Rev. O. E. Connett who was then pastor of the Methodist Church there. Marie served as a pastor’s wife for few years of Methodist ministerial service in several Southern Illinois towns before James volunteered to enter the Chaplaincy in the U. S. Army. Marie and children returned to Flora to live with the Rev. O. E. Connetts while James served in WWII.  Marie became an Army wife again when James entered the service during the Korean War and moved to many duty stations during his long military career.  While living at Ft. Myer, VA, Marie worked in the local Red Cross Chapter on the post. She had the unique experience of being present at the burial of President John F. Kennedy in Arlington Cemetery during this time.
When her husband passed away in 1973, Marie returned to their home in Flora where she became very active in the First Methodist Church, teaching adult Sunday school, and volunteering for many committees.  In 2001, she was honored with the Little Wabash District Woman of the Year in Missions Award.   Marie also volunteered for Meals on Wheels, for the Flora Hospice, and as an information volunteer at the Clay County Hospital.  She was devoted to the service of others and drove many people to medical appointments, took cards and food to shut-ins, and visited many residents in the Flora care centers.  Marie loved gardening and flowers and enjoyed attending the Flora Garden Club for many years.  She lived in, and was well traveled in many states, including Alaska and Hawaii, cruised the Caribbean, visited Japan, and toured the Holy Lands.
Marie is survived by her three children: Chaplain (COL) Reynold B. Connett, USA, Ret. of Olympia, WA, Janice A. Connett, of Albuquerque, NM, and James E. Connett, General Manager of the RAF/STL Classical Radio Station in St. Louis, MO.  Marie is also survived by eleven grandchildren:  Lisa, Erik, Kysa, Sean, Erin, Kelsey, Woo Jin, Charles, Jennifer, Justin, and Alexis; and nine great-grandchildren: Kira Marie, Anthony, Kai, Kiahna, Garrett, Anna Marilyn, Riley, Elizabeth, and Emiliana.  Marie was preceded in death by her parents: Frances and Frederick Block, her husband: Chaplain (COL) James A. Connett, USA, Ret, Dec, and 7 siblings.
A memorial service for Marie Connett will be held at 11 a.m. on Friday, January 23, 2015 at First United Methodist Church in Flora.  A private interment will take place in Arlington National Cemetery, Arlington, VA.  The family has requested that there be no flowers or sympathy gifts at the memorial service but suggest memorial donations be made to Flora First United Methodist Church in Marie’s memory.  Frank & Bright Funeral Home in Flora is assisting the family with arrangements.  To share a memory or condolence, visit www.frankandbright.com