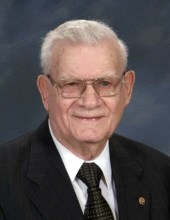 Reverend LeRoy Pittman, 97, of Carbondale passed away at 2:25 p.m. on Thursday, March 23, 2017 at Memorial Hospital of Carbondale.

He was a graduate of Elkville High School and served his country in the U.S. Navy in the South Pacific as a Chaplain’s assistant and was honorably discharged in 1945. He attended Southern Illinois University in Carbondale (SIUC) where he received his bachelor’s degree and was in the university’s very first graduating class. He continued his education by attending Asbury Theological Seminary in Wilmore Kentucky obtaining his master’s degree.

As a United Methodist minister, he served many churches in Southern Illinois including Gorham, Flat Rock, Anna, Granite City (Nameoki), Pinckneyville, Eldorado, Little Grassy United Methodist Camp, Olney (Immanuel), and over saw major building programs at Granite City & Pinckneyville. Throughout his ministry he set aside honorariums he received for weddings, funerals, etc. and used them to help those in need. He also served on numerous board & commissions of the Southern Illinois Conference of the United Methodist Church, including The Wesley Foundation at SIUC.

Rev. LeRoy retired in 1985 as United Methodist minister but continued to minister to those around him providing comfort and guidance to many people. One of his passions was the Regional & International Wally Byam Caravan Airstream Clubs where he served as the Regional and International Chaplin.

He was a member of the SIUC Alumni Association, VFW, Southern Illinois Center for Independent Living, Learning in Retirement (SIUC) and many church organizations. He was an avid Saluki basketball fan and in recent years could be seen at almost every home game with his 3 special friends and never missed a St Louis Cardinals baseball game on TV.

He was an avid story teller and always had one ready especially if you had a chocolate shake for him. Some of his favorite stories were about growing up on the farm outside of Elkville, riding his pony to school, and courting his future wife, Vera. When asked, “How are you?” he always replied, "I'm doing the best I can for the shape I'm in.” LeRoy lived independently until his final hospitalization, he was living at Liberty Estates at the time of his death.

Meredith Funeral Home in Carbondale is assisting the family with arrangements.
Memorials are the preferred form of remembrance and may be made to The First United Methodist Church Music Program or Hospice of Southern Illinois and will be accepted at the church or by the funeral home.

To share a story or memory of LeRoy, please visit, www.meredithfh.com