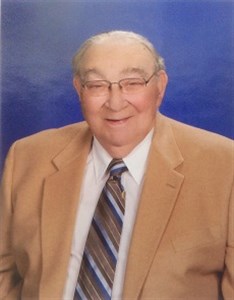 Geoffrey L. Story, Jr., 81, of Bloomington passed away from a long-term heart ailment on Wednesday, February 11 at Bickford of Bloomington.

G.L.'s celebration of life service will be held on Monday, March 2 at 11:00 am at Wesley United Methodist Church of Bloomington with Pastor Vaughn Hoffman officiating. Following the services a luncheon will be held at the church.

In lieu of flowers memorials may be made to the Geoffrey L. Story, Jr. Endowed Scholarship at Illinois Wesleyan University, P.O. Box 2900, Bloomington, IL 61702-2900.

He is survived by his son, Greg Story of Fairhope, AL, and daughter, Anita Story Friedmann, and son-in-law, John Friedmann, of Norfolk, VA. He has a beautiful granddaughter, Holly Story Miller, and two great-grandchildren, Ellie and Haylee, living in Danville, IL. His wife of 61 glorious years, Bettie, passed away in November, 2014.  The family also wants to extend their gratitude to his home caregivers, Kaye Lynn McClain and Debbie Thompson, who have become like family.

G.L. was born in 1933 in Beauregard, AL.  The son of a farmer, he was the first in his family to attend college. He met his future wife, Bettie, in high school and they both attended Birmingham Southern College. They married in Mobile, AL in 1953. Following graduation, they moved to Evanston, IL where G.L. attended Garrett-Evangelical Theological Seminary at Northwestern University. He received a Bachelor's of Divinity, a Master's of Arts, and a Doctorate of Philosophy. He was ordained a minister in the United Methodist Church in 1962.  In lieu of serving a church, G.L. fulfilled his calling through teaching at the collegiate level. He began his academic teaching career at Ferrum College in Virginia. In 1966, they moved to Bloomington, IL where he started a 32-year career as a professor in Illinois Wesleyan University's Department of Religion. He served as department chairman for many years. With an academic focus on New Testament studies, he taught thousands of students before retiring in 1998. He continued his love of academic studies through participation in several book and discussion groups with numerous long-time friends.

He will be dearly missed by the many people he loved and influenced throughout his life.

Online condolences may be made to www.calvertmemorial.com.