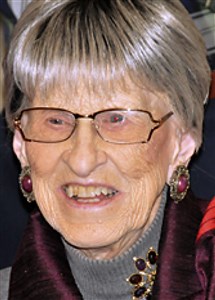 Helen Marie McNicol Sheldon of Minneapolis, Minnesota, formerly of Bloomington, Illinois, passed away near noon on Monday, February 16, 2015. She had been a patient for nearly a year in the care suites at The Heathers Manor in Crystal, Minnesota. Mrs. Sheldon was born January 28, 1919, daughter of Dr. & Mrs. A. M. McNicol of Dixon, Illinois. She was a student of the Dixon public schools, and a graduate of Illinois Wesleyan University. She married the Rev. Chester E. Sheldon 73 years ago, August 17, 1941; he survives. The couple has three sons: Dr. Roger E. Sheldon, formerly of Oklahoma City, currently of Minneapolis, Gordon W. Sheldon of Sarasota, Florida; and Mark L. Sheldon of Hong Kong. The Sheldons have four grandchildren and seven great grandchildren.

Rev. & Mrs. Sheldon were lifelong residents of central Illinois serving United Methodist Churches in Cooksville, Verona, Wellington, Sibley-Strawn, Milford, Dwight, Springfield, Monticello, and Pana. Pastor Sheldon was also district superintendent of the Springfield District. Their final church appointment was in Bloomington as Executive Director of the conference office. They retired in 1984 and continued to live in Bloomington. Two years ago they moved to Minneapolis to be near their eldest son.

A mother of sons, Helen was a vocal advocate for womens’ education, opportunity and achievement—much to the benefit of her daughters-in-law, granddaughters (several holders of advanced degrees), great granddaughter, and all the men in her family. She was the recipient, with Chet, of the Illinois Wesleyan Alumni Loyalty Award in 2012.

Helen, age 96, always active in local churches and the conference United Methodist Women, was also a poet. In observance of her 90th birthday the family published a number of her writings.