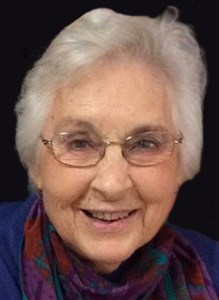 Clarice Ann Johnson, 87, passed away Saturday, May 13, 2017 at her daughter's home in Pleasant Plains, IL, surrounded by her family.

Annie was born June 29, 1929 in Kansas City, MO, the daughter of Jesse Bert and Dona Isodora McCutchan Bushnell. She married James “Mick” Philip Johnson on November 4, 1950; he preceded her in death on October 29, 2009.

She was a longtime resident of Plymouth, IL. In 1988, after retirement, she moved to Osage Beach, MO with her husband, and moved to Springfield in 2010.

Annie started her career as a schoolteacher, but for decades, she helped her husband run Bushnell Well Drilling in Plymouth, the family business founded by her father in the 1940s. She was exceptionally devoted to her family.

She was also deeply committed to community and faith organizations, particularly the United Methodist Church. She served in a variety of leadership positions within the United Methodist Women. From 1983 to 1986, she was Vice President of the Jacksonville District UMW. From 1988 to 1996, Annie served on the executive committee of the Central Illinois Conference United Methodist Women, including a four-year term as president. She was also an advocate for Cunningham Children's Home in Champaign-Urbana, where she was a board representative from the Jacksonville District UMW in the early 1980s, and for the Baby Fold in Bloomington. She was a member of United Methodist Church congregations in Plymouth, Harper Chapel UMC in Osage Beach, and most recently Laurel UMC in Springfield.

Annie was also a member of the Order of the Eastern Star. In October 1969, she became Mother Advisor for the Rainbow Girls Assembly in Plymouth and served more than 10 years, until the assembly closed. She was also a Den Mother for Cub Scouts and a Brownie troop leader when her children were young.

She was also preceded in death by her parents.

A celebration of Annie’s life will be held in Plymouth at a later date.