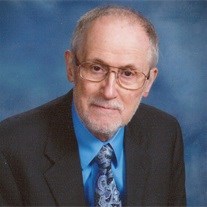 Ernie was preceded in death by one sister, Dorothea in 2017.

After retirement, Ernie attended the Morton United Methodist Church and was a member of the Illinois Great Rivers Conference. Ernie was actively involved in many church youth camps. He enjoyed working with HO trains, photography and kayaking.
A funeral service will be held at 10:30 a.m. Saturday, June 17, 2017, at Morton United Methodist Church, with Rev. Gary Motta, Rev. Don Ferrill and Rev. Ehrhardt Lang officiating. Visitation will be held from 5 to 7 p.m. Friday, June 16, and from 9:30 to 10:15 a.m. Saturday, June 17, both at the church. Burial will be at Hirstein Cemetery in Morton.

Memorials may be made to Morton United Methodist Church building fund or to the Preacher Aid Society in Springfield, IL.