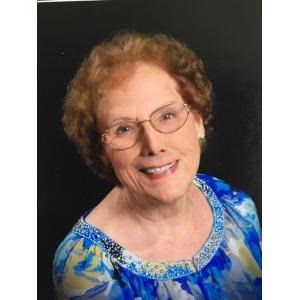 Rubye was born on February 6, 1924, in Maud, KY to Hedger and Myrtle Simpson. She married George Russell on June 6, 1953 at the Methodist Church, Mackville, KY. Rubye graduated from Asbury College, Wilmore, KY in 1947, returning later to do some graduate work. Upon graduation she worked as Song Evangelist and Youth Worker. She also worked as a substitute teacher.

After marriage she and her husband pastored several churches in Kentucky until moving to Illinois where they continued as pastors. She also attended Garrett Theological Seminary. She served as pastor for several local churches at Verona, Mazon, New Salem and Odell, IL. From 1993-1996 Rubye served as the first Chaplain at Evenglow Lodge in Pontiac, IL retiring in 1996. After retirement she continued to volunteer at Evenglow and Woodridge Retirement homes, Livingston County Food Pantry, as well as preaching at local churches as needed. In 2014 Rubye and George received the Pontiac Citizen of the Year Award and Pontiac Volunteer Award in 2016.

Rubye and George were members of NOMADS, a volunteer organization of the United Methodist Church, serving people, day care centers and churches. Rubye participated in 36 projects in Florida and Alaska and 10 projects at Evenglow Lodge. She also served on mission trips to McCurdy School in New Mexico and in Mexico. From 1999 to 2014 they used their skills making life a little better for many people.

One of her churches said of Rubye, “She walked in love for God and for others.”

A memorial service is scheduled for Sunday, July 23 at 3:00 p.m. at the United Methodist Church in Pontiac, with a reception to follow in the Fellowship Hall. Pastor Tom Goodell and Rev. Gretchen Stinebaugh will officiate the ceremony. All are welcome to attend and celebrate Rubye’s life. In lieu of flowers preferred memorials may be to the Pontiac United Methodist Church, Livingston County Food Pantry, Evenglow Lodge, and United Methodist NOMADS, P.O. Box 3508 Shawnee KS 66203.