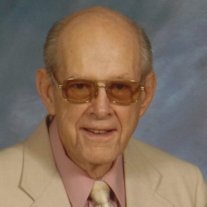 Born April 2, 1928, in Pittsburg, IL to the late Artie and Ethel (Crossen) Banks. He served during World War II with the United States Army and then in the Korean War with the United States Air Force. Formerly owned "Opportunity Homes", a construction company that built many homes in the Ropp and Lakewood Shores Subdivisions, both located in Wilmington. Past President of the Wilmington Rotary Club and previous member of the Joliet Board of Realtors.

In his retirement, Oren became a minister and served at the United Methodist Church in Ritchie for eight years and continued to serve many Methodist churches throughout the local area.

In lieu of flowers, memorial donations in his name may be directed to the United Methodist Church's in Ritchie and Braceville for missions. For more information and sign his online guestbook please log on to: www.rwpattersonfuneralhomes.com.