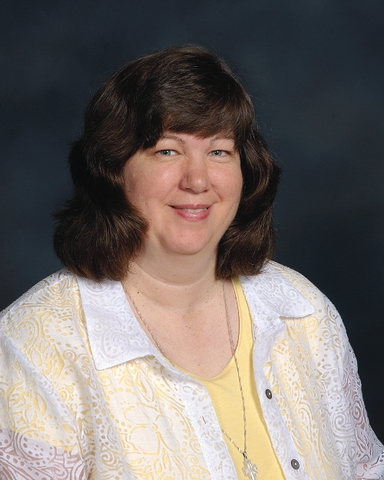 Challenging a vet’s prognosis, she preserved the life of an abandoned litter of day-old kittens by carefully preparing formula and feeding the fuzzy felines with a mini-eyedropper. She breathed life back into a struggling newborn puppy with mouth to nose resuscitation. Despite her healing abilities, Gina Marie Sheridan could not thwart the debilitating effects of Progressive Supranuclear palsy. Pastor Gina peacefully passed into God’s awaiting arms at home while sleeping Sunday morning, August 25, 2013.

Born on October 22, 1959, in Anderson, Indiana, to Bernard and Rosalyn Burgan, Gina joined brothers Steve, David and Marty. The majority of her formative years were spent in Anderson where Gina was active in drama, music (singing and piano), youth group activities, journalism, swimming and horseback riding. A proud Pirate, she graduated from Madison Heights High School as a member of the Class of 1977.

Indiana University was Gina’s next stop where she majored in Elementary Education. While residing in Wright Quad during her sophmore year, Gina worked at the dorm snack bar. There, she met Tim Sheridan. According to Tim, Gina made the "best chocolate chip hot fudge sundaes around." The specially made sundaes sweetened a relationship. At Christmas-time 1979, Gina and Tim became engaged conditioned on Tim’s learning to play bridge. On August 9, 1980, during a candle-lit ceremony at Maple Grove Church of God in Anderson, the couple exchanged vows. Immediately following the ceremony, a violent storm raged through the area, depositing torrents of rain. One observer commented, "The Lord is crying tears of joy."

Over the next three years, a succession of career moves for Tim, a college administrator and instructor, saw the couple reside Elmhurst, Il, Jacksonville, Il, and Elkins, WV. While residing in Elmhurst, Gina fulfilled her student teaching requirement by commuting to Whiting, Indiana. She completed additional coursework through Elmhurst College and MacMurray College, Gina held part-time positions in the campus bookstores of each school. Gina also worked as a teacher’s aide for the Jacksonville School District. During their year-long stay in Jacksonville, Gina and Tim joined a duplicate bridge club where they gained valuable knowledge from more experienced players, and enjoyed substantial success in local events and tournaments.

The Sheridan’s spent three years in Elkins. Gina served as a substitute teacher in the public school system. Gina and Tim became actively involved in First United Methodist Church of Elkins, enjoying the camaraderie of a special group of similarly young couples. In addition to bridge playing, Gina and Tim also competed on church teams in coed softball and volleyball. They explored the extraordinary sights and sounds of the region’s forest covered mountains and enjoyed local cultural events including the Mountain State Forest Festival and Augusta Heritage Arts Festival. While residing in Elkins, Gina learned the art of tole painting. This began an artistic collaboration with Tim, a woodworker, as the couple blended their skills on scores of country-style projects for sale or presents to family and friends.

The family grew by one on June 30, 1983, with the birth of a son, Corey. In early 1985, Gina and Tim learned that a second child was on the way. While the couple loved the rugged beauty of West Virginia and the generosity and warmth of friends, neighbors and church, Gina and Tim desired that their children be raised closer to their families. While Gina mentally prepared to leave Elkins, Tim embarked on a geographically specific job search. On October 2, 1985, Gina and Tim welcomed daughter Kelly into their Elkins home, albeit briefly. Within a few short weeks, the Sheridan’s tearfully departed wild and wonderful West Virgina.

She was preceded in death by her mother, Rosalyn and one brother, Steve Burgan.

In November, 1985, Tim joined the student services staff at Western Illinois University. After to relocating to Macomb, the couple soon joined Wesley United Methodist Church; Wesley quickly assumed a pivotal role in the Sheridan family’s present and future. Gina became deeply involved in the WUMC activities including sanctuary choir, a women’s Bible study, a prayer group, and directing a children’s choir. She provided leadership for Vacation Bible School and youth mission trips. She and Tim helped lead the senior high youth group and were active members of the Pairs and Spares Sunday School Class. For a short time, Gina worked for the Good Hope- Jerusalem United Methodist Church charge. In her spare time, Gina offered piano lessons in home and continued to collaborate with Tim on artistic endeavors. She also served as a substitute teacher for the Macomb and former Colchester School Districts.

During the early 1990's, Gina felt an increasingly strong call into ministry. She participated in a discernment and ministerial candidacy process through the Methodist Church. In 1992, Gina was appointed to provide leadership for Friendship United Methodist Church. The following summer, she completed study for and received her Local Pastor License.

In August, 1994, Gina began seminary study at Anderson University School of Theology. The family bought a home in Anderson. Tim continued his work at WIU and commuted to/from Anderson each weekend. The family affiliated with New Horizons United Methodist Church where Gina provided leadership with youth ministries. After two years, the family altered plans; their primary residence again became Macomb, and Gina assumed the role of commuter. In early 1997, Gina received a half-time appointment as the Pastor for Taylor Ridge United Methodist Church.

Gina and Tim reconnected with Wesley UMC, sharing their love for music and learning by participating in the sanctuary choir and Journeys in Faith Sunday School Class. She especially enjoyed the Palm Sunday and Easter performances last spring.

Gina Sheridan will be remembered for her spirit of joy, deep compassion and wide-ranging talents. Whether fashioning a clever Christmas costume for a child; dipping delectable chocolate delicacies for a fund-raiser; baking pies for a holiday gathering,; coordinating a children’s choral ensemble,; eulogizing the life of one recently deceased; painting a backdrop for a communion setting, reading Thomas the Train to her grandson; or praying with a family in need of blessed assurance, Gina Marie Sheridan - loving mother, wife, pastor and friend - did so with grace, warmth and, more often than not, a tear.

A Celebration of Life and Faith Service will be held at 11 a.m. Thursday, September 5, 2013 at Wesley United Methodist Church in Macomb with Doctor Howard White officiating. There will be no visitation. Cremation rites have been accorded.

Memorials may be made to Kid’s Hope USA program at Colchester UMC or Children’s Music Ministry at Wesley UMC.

Clugston-Tibbitts Funeral Home in Macomb is in charge of arrangements.