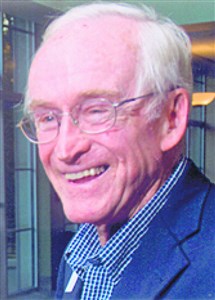 His memorial service will be at 11 a.m. Saturday at First Presbyterian Church, Normal. The Rev. Larry Gaylord will officiate. A light lunch will follow the service. Visitation will be from 4 to 6 p.m. Friday at the church.

Jerry was born Nov. 9, 1926, in St. Louis, Mo., but grew up in Okmulgee and Wainwright, Okla. After serving in the Navy as a radio operator, he attended the University of Oklahoma where he received a law degree. Returning to Okmulgee, he became an insurance adjuster and assistant county attorney for five years before attending Garrett Theological Seminary and Northwestern University in Evanston. He received a master of divinity degree from Garrett and a doctor of philosophy degree from Northwestern. There he met and married Judy Stone, a fellow graduate student. In 1961, the young family spent two years in Basel, Switzerland, where Jerry researched and wrote his doctoral dissertation. On their return to the U.S., Jerry served a Methodist church in Muskogee, Okla., before being invited to teach in the religion department at Illinois Wesleyan University.

During his 28 years at Wesleyan, Jerry was appointed director of the Humanities Division, in 1969 was named Century Club Teacher of the Year, and in 1992 was the Student Senate recipient of the annual Professor of the Year award. He was selected for the McFee Chair of Religion. He served on numerous university committees and he read many scholarly papers at the annual meeting of the American Academy of Religion and elsewhere. Every other year for 20 years during the University’s January Short Term, he and Judy took students to Europe to study 12th century religious art and architecture. He wrote the textbook for this course using his own photographs. His family lived in Switzerland and England during sabbaticals. He spent another January short term as an exchange professor at St. John’s University in Collegeville, Minn. His publications include essays in scholarly journals, chapters in books and encyclopedia entries.

During his early years at Illinois Wesleyan, he served a church in Cooksville and later was interim pastor at a local United Church of Christ church. He taught adult education classes and occasionally preached at First Presbyterian Church, Normal, where he and his family attended. For two years he taught literature courses through Bloomington’s Adult Education Program; he organized and taught two adult summer seminars at Illinois Wesleyan. Teaching was his passion.

Jerry’s family traveled extensively in Europe and the U.S. He was awarded professor emeritus on retiring in 1992. He and Judy spent winters in California’s Bay Area near three of their adult children. He is survived by his wife, Judy; by his children, Jeff, Doug, Claire and Steve; and by eight grandchilden and four great-grandchildren.