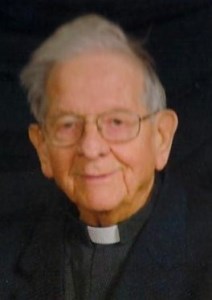 Rev. Raymond Richard Worden, age 92 of Roodhouse, died Wednesday, April 17, 2013 at the residence of his caretakers, Dawn and Josh Fry of Greenfield. He was born January 10, 1921 in Rock Ford, Colorado, the son of Ralph A. and Theresa Dornbury Worden. He married Greta Duncan April 8, 1964 in Las Vegas, Nevada, and she preceded him in death March 2, 2006. He is survived by his children, Doug Worden, Paul Worden, Christina Gregoire, and Connie Thayer. He is also survived by his “adopted” family and caregivers, Dawn and Joshua Fry, and their children, Abby and Aaron of Greenfield, along with other family members, Randy and Martha, and 18 grandchildren. He served in the U.S. Navy during World War II as a chef on the aircraft carrier USS Shangri La. He attended Cliff School of Theology in Denver, CO. earning a Masters Degree in Theology. He was a Methodist minister, beginning his service at Prairie Gem Methodist Church in Brewster, Kansas in 1951, and served at various appointments in the Illinois Great Rivers Conference. He finished his career at the Carrollton and White Hall United Methodist Churchs, retiring in 1986. After retirement, remaining a member of the Illinois Great Rivers Conference, he attended and was actively involved at the Roodhouse Methodist Church and then the Christ United Methodist Church at White Hall, filling the pulpit on many occasions. Rev. Worden was a member of the American Legion and AMVETS, and also the White Hall Masonic Lodge #80, AF & AM. He enjoyed flower, gardening and reading. He also loved his dogs, Molly and McGiver. Funeral services will be held at 11:30 a.m. Monday, April 22, 2013 at Christ United Methodist Church in White Hall, with burial in Fernwood Cemetery in Roodhouse. Visitation will be from 10:00 a.m. until service time Monday at the church. Memorials are suggested to Christ United Methodist Church. Airsman-Hires Funeral Home in Roodhouse is in charge of arrangements. Condolences may be left on-line at www.airsman-hires.com