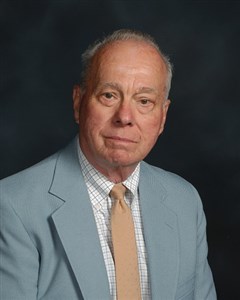 Donald L. Long 85 of Macomb, went to be with his Lord at 6:30 P.M. Friday, February 15, 2013, at McDonough District Hospital in Macomb, Illinois. He was born May 24, 1927, in Chicago, Illinois to Lucille Dawson.
Donald was united in marriage on August 25, 1952, in Lewistown, Illinois, to Eleanor Nott, she survives, also surviving to mourn his passing are 2 Daughters: J.L. McCall, Adair, Illinois and Elizabeth and Kenneth Zwolak, Lansdowne, Pennsylvania, 8 Grandchildren, 4 Great Grandchildren.
Donald was preceded in death by his mother, and 1 Daughter: C.J. Kremer.
Donald served his country in the U.S. Navy, he taught in a one room school at rural Lewistown, He had been a school Administrator for 35 years at the Industry, Petersburg and Morrisonville, Illinois school districts. He served as the Pastor for the United Methodist Churches at Sadorus, Illinois, and Hillsgrove and Friendship Churches in McDonough County.
Memorial services will be 2:00 P.M. Sunday, February 24, 2013, at the Hillsgrove United Methodist Church, with the Rev. Sylvester Weatherall. A potluck meal will be held 12:00 Noon at the Church in Donald’s honor. Burial will take place at a later date. Arrangements are being handled by Jones Mortuary. Memorial is to the Cunningham Children’s Home. To leave condolences to the family visit online at jonesmortuaryfh.com.