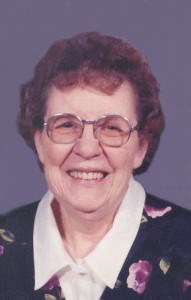 Expressions of sympathy may take the form of a contribution to the Willow Hill United Methodist Church or to the Alzheimer’s Association with envelopes at or may be mailed to Pulliam Funeral Home, P.O. Box 121, Oblong, Illinois 62449.

Born in Hunt City, Illinois on June 26, 1924, she was the daughter of Press White and Elva Merl (Layman) White. Hazel was a homemaker. She was a member of the Willow Hill United Methodist Church. She enjoyed numerous volunteer duties at the church where she played the piano and was involved in other music activities.

Burial will be in the Mound Cemetery, rural Jasper County, Illinois.