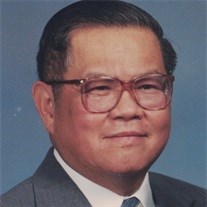 A memorial service for Kim will be at 11:00 a.m. on Friday, September 8, 2017 at First United Methodist Church in Normal with Pastor Kim Burke and Pastor Kathy King-Noble officiating. Visitation will be one hour prior to the service at the church.

A private family inurnment will be held. In lieu of flowers, memorials may be made to Preachers Aide Society.

Kim graduated from Garrett Evangelical Seminary and faithfully served in the ministry for over 30 years. He was a Methodist Clergyman in Kansas City, MO, Evanston, Collison, Hebron, Taylor Ridge, Dallas City, Burnside, Broadlands, Longview, Beason, Chestnut, Farmington, and Casey. Kim and Marjorie served as missionaries to the Chinese in South Korea from 1964-1969.He was also the Pontiac District Superintendent for 6 years, retiring in 1991.

Kim was a loving husband, father, grandfather and great grandfather, he lived his life serving others and will be greatly missed.