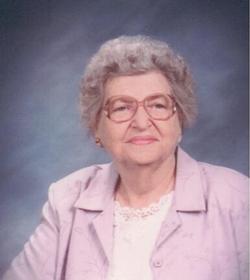 Edith went to grade school in Summerfield and Trenton, Ill., graduating from Trenton High School in 1939. She earned a teacher certification from Eastern Illinois University in 1941, bachelor's in education from SIUE in 1965, and master's in Education from SIUE in 1969. Her teaching career started in 1941 at Virgin School south of St. Jacob, where at the school's Young Adults' Group, she met her husband to be, Paul Widicus. She then taught for two years at Stallings School in Granite City. Edith and Paul were married on July 12, 1943, in Washington D.C. while Paul was serving in the U.S. Army Air Corps. After the war Edith and Paul lived south of St. Jacob, farming and raising five children.

After raising her children, Edith returned to teaching with special-education classes at Marine and St. Jacob schools from 1959 to 1973. She served as principal of Troy Primary School from 1974 until her retirement in 1981. Edith was president of the Triad Education Association, named Madison County Teacher of the Year, runner-up for State Teacher of the Year in 1974, and awarded the Easter Seal Gold Star in 1972.

In 1991, Edith moved to Good Samaritan Village in Kissimmee, Fla., and continued her active life in that community's AARP Chapter, Family and Community Educators, director of the Nursing Home Gift Shop and receptionist at the Wellness Center. Edith also worked in the community as president of the Osceola County Family and Community Educators, Retired Illinois Teachers in Florida, Kissimmee United Methodist Church, teacher of English to Chinese children at Splendid Chinese Park, and volunteer at Give Kids the World.

Edith returned to Troy in 2004 where she lived at the Fountains until 2009, when she moved to Faith Countryside Village in Highland. Throughout her life, Edith loved teaching children and

adults and made many lifelong friends through her teaching experiences. She enjoyed traveling around the world, visiting children and friends, sewing, quilting and crafting. She will be greatly missed by all.

Memorials may be made to the Troy United Methodist Church for the Carillon Bells or Give Kids the World, Kissimmee, Fla. Online expressions of sympathy may be made to www.laughlinfh.com