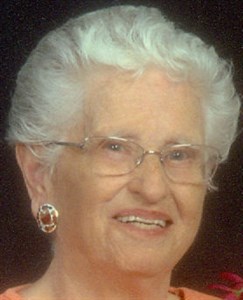 Mrs. Harriett Gale Salzman (Brown), 91, of Decatur, IL, passed away from natural causes at midnight on September 1, 2017 at her current residence at Bickford Cottage.

The funeral service will be held at 11:00 am on Saturday, September 23, 2017 at Grace United Methodist Church, 901 N Main St, Decatur, IL 62521. A time of remembering with family members will begin at 10:00 am. Dr. David R. Wence, Retired United Methodist Pastor and Licensed Clinical Professional Counselor and founder of Decatur Psychological Associates, P.C. will be officiating. Ashes will be entombed in the Star of Hope Mausoleum along-side her husband, Rev. Orville “Lefty” Salzman, who preceded her in death. Funeral arrangements are being handled by Brintlinger and Earl Funeral Home.

Gale was born in Bloomington, Illinois on November 6, 1925, daughter of William H. and Pauline Knox. She graduated from Bloomington High School and continued her education at Illinois State University, earning her Bachelor’s Degree in 1946 and a Master’s Degree in 1948. During her college years she was editor-in-chief of the “Vidette” student newspaper and also taught journalism at University High School in Normal, IL.

Gale began her working years as a teacher for Pittsfield Community High School. She taught English and Latin and sponsored the “Saukee Scoops” (the student newspaper). Gale taught for several years during her husband Orville’s first years in the ministry. After moving to Decatur in 1953 she set upon a lifetime journey serving the mentally handicapped children and adults throughout Central Illinois. On March 8, 1958 she spearheaded, along with a few parents, the first classes for their developmentally disabled children in the education wing of her husband’s church; Third United Methodist Church (then called Third Evangelical United Brethren). Gale nurtured that small community of volunteers into a multi-faceted agency called Progress (School) Resource Center. At the time of her retirement Progress was a community based service agency servicing the special needs population of Macon County from birth to the grave. Progress had a budget that exceeded $2 million and employed a staff of more than 75 educators, therapists, social workers and various other specialists. For Gale, each participant at Progress was more than client, they were family who all knew her as simply “Miss Gale”.

Though Progress School consumed much of her time she still gave herself extensively to various volunteer opportunities around Decatur. Of course, she was active in her local church teaching, leading workshops, coordinating and resourcing Lab Schools, piloting fundraising campaigns, serving on various servicing board in Macon County and participating in Lions Club where she received the Melvin Jones Award. She and Orville (Lefty) were proud to have attended 20 International Lions Convention taking them on numerous adventures around the world – Taiwan, Korea, Hawaii, Chicago, Toronto and Montreal. She and Lefty loved to travel. Over the years they found themselves trekking the highlands of England and Scotland, skimming the beaches of Australia and Figi, walking the ancient highways of Asia and surveying the rustic tundra of Africa.

Gale is preceded in death by her husband, Orville Leslie Salzman and one sister, Miriam Bixenman.

Gale’s family and friends will miss the times of sharing and her special way of celebrating Christmas all year round with her collection of over 1500 Santas from all over the world. We love you mom, grandma and great-grandma.

Memorials may be made to Grace United Methodist Church in Decatur, IL or the Alzheimer’s Association (https://act.alz.org/donate).

Condolences may be left to the family in care of Brintlinger and Earl Funeral Home, Decatur at www.brintlingerandearl.com