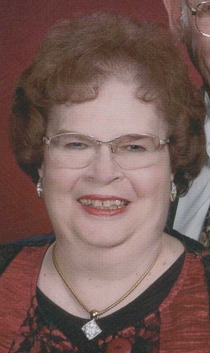 Alice Ann Heitkamp, age 75, of Centralia, Illinois, passed away at 2:30 A.M. on Saturday, March 15, 2014 at the St. John's Hospital in Springfield, Illinois. She was born July 9, 1938 in Centralia, Illinois, the daughter of Enoch and Stella (Johnson) Morris. She married William “Willie” Heitkamp on July 15, 1956 at the First United Methodist Church in Centralia, Illinois and he survives. She lived in Centralia her entire life. In addition to her husband of 57 years, she is survived by her daughter, Rose Marie Straeter, MA and son-in-law Richard of Mt. Vernon, Illinois, son Reverend Dr. Steve Heitkamp and daughter-in-law Mindy of Shiloh, Illinois, 4 grandchildren Mark William Straeter who will graduate from Southern Illinois University in Carbondale in May 2014 in Aviation Technology, Jeanette Rose Straeter who is a student at Tulane University in New Orleans, Louisiana studying Accounting and Marketing, Brynn Elizabeth (Heitkamp) Hackney and husband First Lieutenant Chris were married in March 2013 with Brynn graduating from McKendree University in 2013 with a degree in Athletic Training and First Lieutenant Chris in the U.S. Army and Shelby Lin Heitkamp is a freshman at Illinois State University majoring in psychology. Alice is also survived by her brother Delbert Morris of Mt. Vernon, Illinois. Mrs. Heitkamp was preceded in death by her parents and infant sibling. She was a member of the First United Methodist Church in Centralia, Illinois, where she was very active in serving her church. She served as a member of the Church Official Board, Finance Committee, Chairman of Administrative Council, Chairman of the Outreach Committee and President of the Marri-Eds Sunday School Class for many years. She organized a Church Prayer Chain, coordinated and directed the church Children's Christmas programs for over ten years. She was a teacher and sponsor of the Junior High Youth Fellowship for ten years, Church Camping Coordinator, Cluster Representative and served in other capacities. She was a member of the Crusader's Sunday School Class. She also served as Lay Delegate to the Annual Conference. Mrs. Heitkamp was also active at the Faith United Methodist Church. She attended Sunday evening services and Monday Prayer Meetings. She was a volunteer for the Faith United Church after school program. She and her husband were Coordinators of the Illinois Great Rivers Conference District Response team. She was also a member of the District Volunteers in Mission Team. She was previously a member of the Bell Choir. Mrs. Heitkamp was a charter member of the Harmony Roses Chorus that was an official chapter of the Sweet Adeline's International. She began attending the Beulah Holiness Camp in the late 1960's. The camp meeting was an important part of her faith journey. She was employed by the State of Illinois Department of Security as an Employment/Unemployment Representative for 23 years years until her retirement on December 31, 1999. Celebration of Life Services will be at 11:00 A.M. on Thursday, March 20, 2014 at the First United Methodist Church in Centralia, Illinois with Reverend Rusty Beals and Reverend Mark Doane officiating. Interment will follow in Hillcrest Memorial Park near Centralia, Illinois. Friends may call from 5:00 to 8:00 P.M. on Wednesday, March 19, 2014 at the Moran Queen-Boggs Funeral Home in Centralia, Illinois and from 10:00 A.M. until the times of services on Thursday at the church. Memorials can be made in Mrs. Heitkamp's honor to the First United Methodist Church, Faith United Methodist Church or the Beulah Holiness Camp's Dorm Renovation Project and will be received by the funeral home.

Charitable donations may be made in Alice's memory to the following organizations:Beulah Holiness Camp's Dorm Renovation Project
http://www.beulahholinesscamp.org/
Eldorado, Illinois