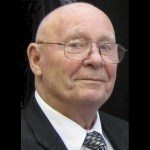 Dr. Robert Scott White, loving husband, father, grandfather, great-grandfather and noted United Methodist Pastor, passed away October 9, 2017 at the Good Samaritan nursing home in Olathe, KS at the age of 88. He was preceded in death by his loving wife of 58 years, Bert, who passed nearly 10 years ago after a battle with ALS. Bob was born on November 26, 1928 in Ft. Wayne, IN to Mr. and Mrs. E P White. Bob was raised in Indiana as the son of a Methodist Episcopal minister and moved around within the state as his father was transferred. Bob and Bert were both devoted to raising their children, Kathy and Scott, as well as the churches they served together. Bob graduated with a master’s degree in Theology from Garrett Theological Seminary in Evanston IN while beginning to serve as a pastor in churches in the Central Illinois United Methodist Conference. Bob received an honorary Doctor of Divinity degree from McMurray College. He also served on the board of Methodist Medical Center in Peoria, IL. During his almost 50 years as a pastor in Central Illinois, he served the following churches: Ridge Farm UMC, East Lynn UMC, Faith UMC (Champaign-where he was founding pastor), University Ave UMC (Peoria), First UMC (Galesburg), St. James UMC (Danville), and Grace UMC (Pekin). Following a very brief retirement, Bob and Bert moved to North Fort Myers, FL to begin a church. They founded Good Shepherd UMC in N. Ft. Myers, FL in the early 1990’s. Once the church activities and attendance became too big for the two of them to handle, they eventually moved back to Shell Knob MO and their house on Table Rock Lake. Shortly after the move, the local UMC district superintendent asked Bob to serve a small church (Cassidy UMC) near Springfield MO, which he did for a couple more years. Bob always had the reputation of being an excellent preacher. We believe his sermons, as well as his faith, impacted the lives of thousands throughout his ministry. In their later years, Bob and Bert moved to the Kansas City area to be closer to family. Outside faith and family, Bob’s loves were travel, golf and boating. Bob is survived by two children; Kathy Musgrave and her husband Bill; Scott White and his wife Lynn; and, five grandchildren: Robert Walters, Lori Johnson, Scott Limkemann, Kristen Blacksher and Brian White as well as eight great-grandchildren. Visitation will be a 3 PM Tuesday October 17, at Porter Funeral Home, 8535 Monrovia Lenexa, KS. The celebration of life will immediately follow at 4 PM at Porter. He will be interned beside Bert at the Resurrection Cemetery. Condolences may be expressed at: www.porterfuneralhome.com Arrangements: Porter Funeral Homes & Crematory, 8535 Monrovia, Lenexa, KS (913) 438-6444)