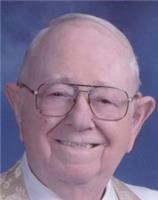 Reverend Hubert P. Lytle, 97, of Watseka passed away on October 15, 2017 at his home.  He was born on March 17, 1920 in Austin, IN, a son of Zene M. and Emma Belcher Lytle.
Pastor Lytle married Ruth Reid in Scottsberg, IN on July 10, 1944 and she preceded him in death on March 10, 1983.  He married Florence Kenney on February 11, 1984 and she preceded him in death on December 30, 2006.  He married Lois Alexander on June 9, 2007 and she survives.
In addition to his wife, Lois Lytle of Watseka, survivors include 1 daughter, Sylvia (Ralph) Gibson of Towanda, IL; 1 son, David (Kathy) Lytle of Lafayette, IN; 10 grandchildren; and 11 great-grandchildren.
He was preceded in death by his parents, 4 brothers and 4 sisters.
Rev Lytle preached for several churches as a United Methodist Pastor, under ordination, for 65 years.  He was a member of the Great Rivers Conference of Illinois.  He helped organize the Iroquois Memorial Hospital Chapel and Chaplain's service, Community Food Pantry, and workforce for Community Action.  He served in the US Army during WW II.
Funeral services will be held at 11:00 am on Thursday, October 19, 2017 at the First United Methodist Church in Watseka with Rev. Robert Sabo officiating.  Visitation will be held from 9:00 am-11:00 am on Thursday at the church.
Burial will be at Wesley Chapel Cemetery in Austin, IN at 1:00 pm (eastern time) on Friday, October 20, 2017.
Memorials may be made to Watseka First United Methodist Church, Preachers Aid Society, Iroquois Memorial Hospice or donor's choice.
Arrangements are by Knapp Funeral Home in Watseka.