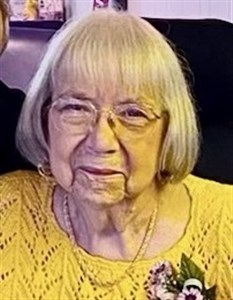 Funeral service will be at 11:00 a.m. Monday, September 13, 2021 at the First United Methodist Church in St. Elmo, Illinois with a one-hour viewing prior to the service.  Pastor Dan Laack will be officiating.  Burial will be at Maplewood Cemetery in St. Elmo, Illinois. Visitation will be from 5 to 7 p.m. Sunday, September 12, 2021 at First United Methodist Church. Memorials may be made to the Historical Vandalia Museum or the donor’s choice.

Anna Jean was born on May 28, 1929 in Tonkawa, Oklahoma, the daughter of Hobart M. and Mattie B. (Garrett) Bates.  She married her high school sweetheart, Phillip H. Rhodes, on February 6, 1949 in St. Elmo, Illinois.  She was a member of the First United Methodist Church in St. Elmo, Illinois since 1943. She loved to cook and she was a collector of many things; she had more than 2000 cookbooks and over 300 nativities. Anna Jean announced the St. Elmo news on the radio and she wrote news articles for several newspapers in the area.  She was a volunteer for many things. Anna Jean has been active in the schools, her church, Women’s Clubs, Eastern Star, 4-H, Girl Scouts, Fayette County Home Extension, American Cancer Society drives, and farming organizations, to name a few. After her husband passed away, Anna Jean took over the management of 423 acres of rented farmland and continued his role of selling for pioneer Seed Co., a position he had held for 15 years. She has contributed countless volunteer hours to her community and the county, including the Fayette County Red Cross Board and Diabetes Board, was secretary for Historical Vandalia Museum, and has served as president for various boards, councils, organizations and causes. She has served virtually every position in her church over the years. She was a member of St. Elmo Women’s Civic Club beginning in 1954. She received a 16-gallon pin for donating blood to the American Red Cross. To honor her years of volunteer service, Anna Jean was awarded 2015 St. Elmo Citizen of The Year.

She was preceded in death by her parents, Hobart and Mattie Bates; husband, Phillip Rhodes; and brother, McKinley Bates.