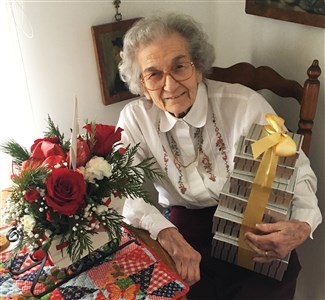 Betty May Birmingham Moorehead, age 99 of Batavia, IL died February 8, 2020. She was born November 19, 1920 in Chicago, IL, the only child of Bruce and Edna (Plummer) Birmingham.
She grew up in the Ravenswood Manor area of Chicago and graduated from Lake View High School, where she played flute and piccolo in the marching band and orchestra. She went to Millikin University, Decatur, IL, where she graduated in 1942. At Millikin she met her future husband, Lee Charles Moorehead. While at Millikin she was president of Alpha Chi Omega sorority. Following graduation and their wedding on August 22, 1942, Betty went to Boston to pursue her masters in social work at Boston University, while Lee completed his final two years of seminary at Boston University School of Theology. Lee was then ordained in the Methodist Church.
From Boston Lee and Betty first went to Columbus, Ohio, where Lee was appointed minister to students at the Wesley Foundation at The Ohio State University and associate pastor of Indianola Methodist Church in Columbus. From that first position until the last, Betty assisted and shared in Lee’s ministry in countless ways. There followed pastorates in Ada, Chillicothe and Columbus, Ohio. While Lee served four years as professor of preaching and worship at St. Paul School of Theology in Kansas City, Betty utilized her social work skills in a storefront neighborhood center in downtown Kansas City. Lee then returned to serving churches at Delaware, Ohio, Carbondale, Illinois, and Green Bay and Madison, Wisconsin. Betty used her social work training in each community, either as a volunteer on various boards, or as a practicing social worker. Retiring in 1984, Lee and Betty made their home in Batavia, IL. After several years in their Batavia home on Sylvan Place, Lee and Betty were the first to move into the newly-built duplexes at The Holmstad.
Because of Lee’s special interest in Abraham Lincoln, for twenty-two years he and Betty directed an annual seminar trip to Springfield, IL to study the life and leadership of Lincoln. Many old and new friends and family from around the country came to experience one of these seminars, and there were many who came several times.
With their shared love of books, Lee and Betty established the Books Between Bites program, fashioned after a program his mother helped establish at Decatur Library in the 1950s. They launched their program in Carbondale, and then Green Bay and Madison, Wisconsin. In retirement it was established in Batavia, where it has flourished for thirty-three years.
Lee and Betty had always thrived on living in university towns, enjoying the opportunity to befriend people from all over the world and to enjoy theatre, symphony, opera, and sporting events. Highlights were season tickets to The Ohio State University football and basketball games, the Green Bay Packers, and University of Wisconsin football.
Together with Lee, Betty, coordinated Batavia United Methodist Church’s involvement at Hesed House for many years and volunteered there frequently. She also delivered meals for the Golden Diners program, volunteered at the Depot Museum, and coordinated blood drives at their church. She also was very active in the Batavia League of Women Voters, working on many important projects and candidate forms for the community. She was a member of Chapter EA of P.E.O. in Batavia.
Betty is survived by children David (Joanne Abell) of Gales Ferry, CT; Debbie Thorpe, of Salt Lake City, Utah; Becky (Mike) Hoag of Batavia; and Tim of Katy, Texas. Grandchildren include David Moorehead, Kimberly (Justin) Sprague, Abigail Lee Thorpe (Allan Clary), Shannon (Kyle) Hamman, Matthew Hoag, Katie Moorehead, and Lucas Moorehead, and Daniel (Fiona) Moorehead. Great-grandchildren are Ainslee and Brady Moorehead; Colby, Annie & Molly Sprague; Elijah Lee and Phineas Hamman; and Adam Thorpe Clary. She is also survived by many nieces and nephews who greatly admired her.
She was preceded in death by her parents, husband Lee in 2003, the twin sons of Mike and Becky Hoag, the first son of Abby Thorpe and Allan Clary, and daughter-in-law Tina Lindsey Moorehead.
The family extends their great appreciation to the loving staff who have watched over Betty the last nine months at Ekstam Assisted Living at The Holmstad. And to the caring staff at Delnor Hospital and Seasons Hospice. A memorial visitation will be held at 10:00 A.M. followed by a memorial service at 11:00 A.M. Saturday, March 14, 2020 at Batavia United Methodist Church 8 N. Batavia Ave, Batavia, IL 60510. Donations in Betty’s memory can be made to Friends of Batavia Public Library; 10 S. Batavia Avenue Batavia, IL 60510 or Batavia Historical Society/Depot Museum; 155 Houston Street Batavia, IL 60510.