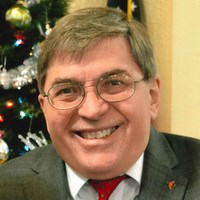 It is with great sadness that the family of Charles Edward Cunningham, 72, of Effingham, IL, announces his passing from this world into the Kingdom of Heaven on August 31, 2020.

He will be lovingly remembered by his wife of 34 years, Janice (nee, Miller) Cunningham; son, Steven (Mina) Cunningham; step-children, Christa (Brian) Packer, Scott (Libby) Moeller, and Andrea (Jason) Holtz; grandchildren: Jamie, Kyle, Tucker, Maggie, Adeline, Grace, and Gunnar.  He was preceded in death by his parents, Edward and Pauline (Glenn) Cunningham.  He was delightfully different, and the world seems to be darker and more normal with him gone.

People knew Chuck. It was a common sight to see him out and about, especially if you worked somewhere that had decaf coffee. He was a man with a big voice and an even bigger smile. He always had time to talk and had a gift for it. Everywhere he went he made friends, as he never met a stranger.  A voracious reader, it was not odd to see him with a book in hand and one in his lap, because he would cheerfully read two in a sitting. He had a curious mind and seemed to know a bit about everything, from history to cars to gardens. However, very few people knew the depth of his knowledge and experience, or just how many lives Charles Cunningham had lived.

He was born on April 12, 1948, at Cook County Hospital in Chicago and grew up in the Logan Square neighborhood. Charles left the city to attend the University of Illinois at DeKalb, where he got his Master’s in Special Education and Doctorate in Adult Peer Teaching. Afterwards he got a job teaching at Keith Country Day School, an upscale private school in Wisconsin. During this time he also kept horses and rode in a wagon train cross country. Later he taught at Sheltered Work Shop, which was a school for the disabled. After teaching he moved to northern Illinois and got a job selling cars at a Ford dealership. While doing this he worked with many local 4-H groups, which led to working with the U of I Agricultural Extension in Effingham where he received the Illinois Distinguished Service award. It was here where he met Janice, the love of his life, and got married in 1986. He continued his work as an Agricultural advisor to Purdue University while raising his family. Chuck continued to seek out education through teaching at Indiana University. Locally, he taught classes in the art of bonsai, as he was also a bonsai master. Gardening and plants were a lifelong passion for Charles, and he designed garden landscapes for those in his local community. In his later years, he worked in a variety of positions: from librarian at Helen Matthes Library to a garden enthusiast at Rural King. In the last years of his life, he even returned to school, this time for ministry, becoming a Methodist pastor. He dutifully served God and ministered at three churches in Willow Hill, Falmouth, and Woodbury. This would prove to be his true and final calling, as he was a gifted orator and a loving pastor who cared deeply for his congregations.

Charles had many loves. He raced stock cars in his youth, being a consummate driver all his life with an affinity for speed. He loved gardening and creation, working living plants into forms such as bonsai or orchestrating the beautiful chaos in his own lush backyard garden. One of his favorite pastimes outside of the garden was fishing. Moreover he so very much loved to teach children how to fish, as every one of his children and grandchildren can attest. He loved studying the birds in his garden, as their songs brought him peace and serenity. He was a man of many talents and wore many hats. He was a loving son, a devoted father, and a doting grandfather.

Due to COVID-19 concerns, the family requests to please wear a mask during the drive-through visitation and follow social distancing guidelines by offering condolences from your vehicles only.

Memorials may be made to Willow Hill United Methodist Church, Falmouth United Methodist Church or the International Myeloma Foundation and sent to Johnson Funeral Home, 1110 N. Fourth Street, Effingham, Illinois, 62401. Please include Charles Cunningham’s name on any mailed donations. Online condolences may be shared and the guestbook signed at www.johnsonandsonsfh.com.

The family wishes to send a special thank you to the staff of Sarah Bush Lincoln Hospital for their care and compassion.