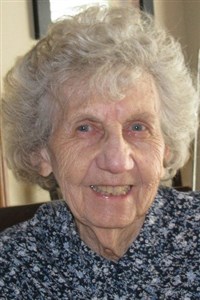 Rev. Charlotte Ann Cowan, age 87, went to be with the Lord on March 21, 2017. She was born, February 11, 1930, in Chesaning, Michigan, the seventh of nine children of Charles S. and Lillian P. Cowan. She was preceded in death, by her sisters, Janette Wyatt and Jean Cowan and three brothers Stanley J. Cowan, Nelson Leslie (Brub) Cowan, and William John Cowan. Surviving sisters are Kathleen Shooltz, Alice Alderson, and Winnie Wesley.
Her legacy is carried on by her six children from her marriage to Robert L. Bonnell, who preceded her in death on February 22, 2015. Vicki Bonnell Ramos, Renee (Jeff) Canfield, Chris (Bonnie) Bonnell, Julie (James) Hatfield, Tim Bonnell, and Amy (David) Hunter. She leaves 8 grandchildren, and 6 great-grandchildren.
She graduated from Chesaning High School in June 1947, where she had been active in Student Council, Forensics, Drama, Band, Home Economics, Scouting and Job's Daughters.
She spent two years at Central Michigan College before taking a years' break and teaching kindergarten and First grade at Oakley School in Michigan. In 1950, she returned to her studies majoring in Speech and English, where she was active in The Wesley Foundation, Journalism, theatre, Yearbook, and writer for the college newspaper.
Following her graduation from college in June of 1952, she became employed by the Alma School District at the new Hillcrest School, teaching kindergarten for four years as well as working with Alma College Education "Teachers-To-Be" program.
In 1953, she married Robert L. Bonnell and later remained at home to raise six children. The family moved to Norton Shores, MI., and she was an active member of the Lake harbor UMC. the church which trained her, sent her and encouraged her throughout her ministry. Charlotte served in the church in both local and district offices and participated in local theatre. Later, she returned to substitute teaching in the Mona Shores Schools.
In 1986 she graduated from Garrett Evangelical Theological Seminary with a Masters of Divinity Degree. In 1987 she was ordained a Deacon and in 1988, ordained an Elder in the United Methodist Church. She began as a Minister/Pastor in the Southern Illinois Conference, eventually serving four appointments which included seven churches. She formally retired in June 1995. But God called her to further do His work.
In December, 1996, while visiting her daughter in Texas, she was invited to serve as Retired Clergy for Suncreek UMC, a new, growing church in Allen. She spent over ten years in the Retired Clergy position in two Texas churches and a church in Troy Il. She was also a Spiritual Director for over forty Emmaus Walks. She conducted many programs within the church including the "Last Supper" presentation and Mary Magdelene performances.
Charlotte enjoyed traveling and made two trips overseas to Israel and also visited Austria, Germany, and Switzerland. She enjoyed visiting the biblical places of the Bible and the Oberammergau Passion Play in 1990. She will be remembered for her love of her Lord and Savior, beautiful sunsets, and her strong faith and family ties.
A celebration of life service will be held at 1:30 p.m. on Saturday, April 1, 2017 at Troy United Methodist Church, 407 Edwardsville Road, Troy, IL 62294
In lieu of flowers, please send any memorials to Alzheimer's of Southern Illinois- http://www.alz.org/illinoi/ or Hospice- https://hospice.org/. Arrangements by Irwin Chapel of Glen Carbon. http://www.irwinchapel.com/.