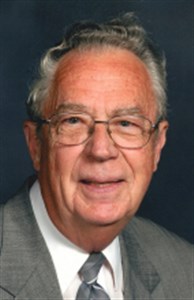 The Rev. Dale A. Kooi, 86, of Kewanee, died Monday, August 3, 2020 at Toulon Rehabilitation and Health Care Center. Dale was born March 7, 1934, the son of Arthur and Gladys (Phillips) Kooi, in Streator, Illinois. He married Carol Ann Palmer of Cambridge in 1954. They had two children, Mary-Carol Riehs, Elmhurst and David Kooi, Kewanee. They survive along with three grandchildren, Madeleine (Matthew) Belk, Carl Riehs (Olivia Kuljian) and Abigail Riehs; a great grandson, Hannibal Belk; and a sister, Donna Hughes. His parents and two brothers preceded him in death.
After graduating from Streator High School, Dale attended Illinois Wesleyan University, earning his BA in Philosophy and then went on to earn his Master’s of Divinity from Union Theological Seminary in New York City.
After ordination as Elder in the Methodist Church, Dale served over 40 years in ministry in central Illinois. Both before ordination and after his retirement, he ministered part-time in churches of several denominations. He took a sabbatical leave in 1974-1975 in order to study at King’s College, London, England, where he was interim pastor at Chelsea United Reformed Church. He and his family gained a great deal from that experience.
Rev. Kooi was a long-time blood donor and volunteer. His carpenter skills were employed when he helped build houses with Habitat for Humanity. He was a member of Phi Kappa Phi and many community and service organizations over the years, serving as president several times.
Dale enjoyed gardening and especially loved roses. He also enjoyed photography and classical music.
There will be no public services at this time. They will be announced at a later date. Memorials may be made to PASBF (Preacher’s Aid and Benefit Fund) or UMCOR (United Methodist Committee on Relief). Please leave an online condolence for Dale’s family at www.schuenemantumblesonfuneralhome.com.