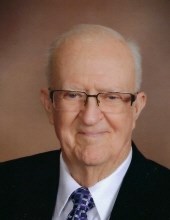 Rev. David R. Deal, 83, of Camby, IN, formerly of Marshall, IL passed away Thursday, Feb. 2, 2017 in Miller’s Merry Manor at Mooresville, IN.
He was a retired United Methodist minister having served church’s for over 50 years at Alfordsville, IN, Alford, IN, Jasonville, IN, Winchester, IL, Fairbury, IL, Marshall, IL and Terre Haute, IN.
David was born April 17, 1933 at Marengo, IN, the son of Oliver M. and Opal Rice Deal. He was first married to Janet Y. Denbo on Oct. 27, 1951 and she preceded him in death on Dec. 10, 2007. He later married Sandra Gross on Jan. 10, 2009 and she survives.
Also surviving are two sons, Deacon J. Deal of Hannibal, MO and Larry J. Deal of Springfield, IL; a step son, Kirk Gross of Bridgeton, MO; grandchildren. Justin M. (Melissa) Deal of Marshall and Janess (Darrin) Bishop of Marshall and great grandchildren, Tonia Bishop, Olivia Bishop, Lucas Bishop, Stephen Deal, Samuel Deal and Jannah Deal. He was preceded in death by a daughter, Lynn Jealene Deal and siblings, Paul Deal, Helen Deal, Marjorie Dean and James Deal.
He was a loyal IU Basketball Fan and enjoyed quail hunting and golf.
Services in honor of his life will be 10:00 AM Monday at Pearce Funeral Home with Revs. John Davis and Greg Davis officiating. Burial will be in the Plainville Cemetery at Plainville, IN at 3:30 PM Monday. Visitation will be 2-6 PM Sunday at the funeral home. For those desiring, memorial contributions may be made to the American Cancer Society or the choice of the donor. Online condolences are being accepted at pearcefuneralservices.com.