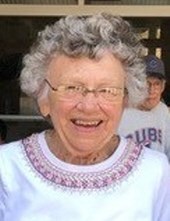 Dawn Pearl Lowe, 94, of Bloomington died at 4:53 PM on Tuesday, September 22, 2020 at Martin Heath Center in Bloomington.
There will be a funeral service for Dawn on Saturday, September 26, 2020, at 5 PM at Calvert & Metzler Memorial Home in Bloomington. Reverend Sara Isbell will officiate. There will be a visitation from 3-5 PM at the Memorial Home Saturday. Interment will be later at Camp Butler National Cemetery in Springfield.
Dawn was born March 7, 1926, in Milwaukee, WI to Henry and Marie Koktavy Thomsen. She married Rev. Donald L. Lowe on August 12, 1951, in Beloit, WI. He preceded her in death on December 16, 2019 in Normal. She is also preceded in death by one sister, Marilyn Helm.
Dawn is survived by two daughters, Debra Sasveld of Naperville, Dauna (Mark) Delashmit of Bloomington, six grandchildren, Jessica (Tom) Carpy, Kelsey Sasveld, Zack Delashmit, Hallie (Robert) Bartlett, Lucas Sasveld, Sadie Delashmit, two great-grandchildren Raegan Bartlett and Abigail Carpy, and one sister LaVerne Wolgast of North Tonawanda, NY.
Dawn was an Elementary Teacher for thirty-five years mostly in Southern Illinois, including the towns of Bunker Hill, Gillespie, Vandalia, Mount Vernon, Harrisburg, and last teaching in Collinsville Unit District 10, retiring in 1986. After retirement she substitute taught at Christ the King School in Springfield. When she wasn’t teaching, she and her husband partnered well for many years in the churches he pastored, with Dawn working in Christian Education and Children’s ministry. They were very proud of the years they spent at Sugar Creek Methodist Church in Springfield where they were part of an outreach team whose motto was “Place for Beginning, Becoming, and Belonging.” Dawn loved playing the piano, listening to musicals, walking for exercise, shopping, and traveling the world. She was known for her coordinated outfits, including jewelry, that she wore throughout her life. She possessed a welcoming nature and was always desiring to help others. Dawn found humor in many situations; she rarely missed an episode of The Tonight Show, starring Johnny Carson, her favorite comedian. She was fiercely devoted to her husband and children and always their biggest fan. Dawn will be dearly missed by her family and friends, who take comfort in knowing that she will be reunited with her husband Don, who was the love of her life.
She was a member of Wesley United Methodist Church, Illinois Education Association, and the National Education Association of Retired Teachers.
In lieu of flowers memorial contributions may be made to the Westminster Foundation. Dawn and Don loved Westminster Village and Martin Health Center, and all the staff and friends that were a part of their lives there. We cannot thank our Westminster/Martin Health Center “Family” enough for all of their care, support, and loving attention.