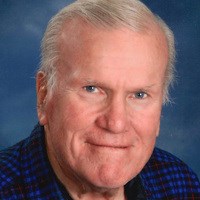 Private family funeral services will be held at Reiss Chapel at Lake View Memorial Gardens, Fairview Heights, IL with burial to follow. Services are in the care of Johnson Funeral Home in Effingham, IL. A public memorial service will be held at a later date.

Memorials may be made to an animal shelter of your choice, or you may plant a memorial tree in Donald's name. Online condolences may be shared at www.johnsonandsonsfh.com.

Donald was born on March 23, 1933 in Mounds, IL, the son of John Henry and Pearl May (Stuhl) DuRall. He married Dorothy “Jean” Renner on December 19, 1953 in East St. Louis, IL. Don had a Bachelor of Arts in Sociology, Bachelor of Divinity in Religion, and a Master of Science in Rehabilitation Counseling.

Don spent his life as a Methodist Minister mostly in Illinois but later in Missouri, eventually building his own home by hand, alongside Jean, out of the trees on their property. He got his call in ministry to serve at the age of 17 in Mounds, Illinois. He also served as a counselor to those in his congregation and started the Methodist Church Pastoral Counseling Service. He also counseled under special appointment for the State of Illinois Department of Mental Health. He was involved with the Methodist Church camps at Little Grassy Lake, Lost Valley Wilderness Experience and in Eldorado, Illinois. He loved the outdoors, vacationing as a family in Missouri along the Jacks Fork and Current Rivers in the Ozarks. He enjoyed reading science fiction, camping, canoeing, flying and motorcycling.

What made Don special was his willingness, energy and desire to help others. This was evident in his involvement with his two grandsons, Danl DuRall and Simon Carnahan.

He was preceded in death by his parents; wife Jean; and brothers Darrell and Doyle DuRall.