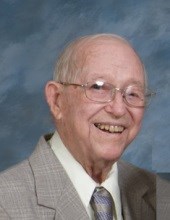 Earl was called to the ministry at the age of 9. His father, also a minister, moved frequently causing Earl to attend 15 different schools before graduating from high school. At the age of 18 he joined the Civilian Conservation Corps where he helped develop Giant City State Park near Makanda, IL, and Copper Falls State Park at Mellon, WI. While in Wisconsin, he helped fight forest fires on Isle Royal in Lake Superior.

In 1936 he left the CCC to attend Adrian College in Adrian, MI. After completing his Bachelor’s degree, he attended Westminster Theological Seminary in Westminster, MD. It was during this time that he married the love of his life, Juanita Earnest, on Dec. 26, 1941. They enjoyed 70 years of marriage before her death in 2012.

During his ministry, he served churches in northern Ohio, the Eastern Shore of Maryland. After obtaining his masters of Divinity, he returned to southern Illinois where he served churches in Enfield, Shipman, Murphysboro, Jerseyville, Carterville, East St. Louis, Benton, and Mt. Carmel. As a pastor, he actively participated in the camping program of the Southern Illinois Methodist Conference at Little Grassy Methodist Camp on Little Grassy Lake. He helped build the original structures, and he and Juanita both directed camps there. In his spare time his hobbies were woodworking, gardening, hunting, and fishing.

He was preceded in death by his wife, parents, eight siblings, and two infant daughters.

Visitation will be on Friday, Jan. 6, 2017 at Crain Funeral Home in Newton from 5 till 8. Funeral services will be held at Falmouth United Methodist Church, Newton, Il. on Saturday, Jan. 7 at 11 a.m. with burial following at Brooks Cemetery. A memorial service will be held in Carbondale at a later date.

Memorial gifts in honor of Rev. Dickey may be made to Preacher’s Aid, the Little Grassy Camp, or the Mt. Vernon Children’s Home all are part of the United Methodist Church.

Online condolences may be offered at www.crainfuneral.com