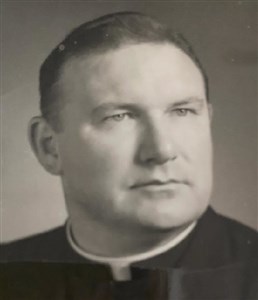 Edward Lawrence Hoffman, 97, of Kansas City, Missouri passed away on Saturday, October 10th.  He resided at Kingswood Manor for the past 10 years.  He was preceded in death by his wife, Lucy Eleanor Wood Hoffman in 2010, and his former wife Vivian Ozment Hoffman in 1954, as well as his parents, Edward Charles and Appa Drucilla Blackburn Hoffman and six siblings.
Edward was born on June 14, 1923 in Walum, North Dakota where his parents were homesteading.  They moved back to Illinois when he was a young child and he was raised on a farm near Murphysboro, IL.  As a young adult, he was called into the ministry in 1942.  He had a circuit of three Methodist churches near Carbondale while also attending Southern Illinois University and played football as All-Conference tackle.  While he did not take to farming like the rest of the family, he did enjoy bird hunting all around Illinois.
In 1944, he met and married Vivian Ozment, from Crab Orchard, IL.  They had a daughter, Julia Ann, in November 1945.  They moved to the east coast to Maryland and then New Jersey for Ed to attend seminary where he received a Master of Divinity from Drew University.  He went on to receive a Masters of Sacred Theology degree from Temple University in Philadelphia, PA.  Their first son, Lawrence Edward, was born May of 1950.
After returning to Illinois, he became Senior Pastor at Centenary United Methodist Church in Effingham IL and taught at McKendree College. Unfortunately, Edward lost his wife to Lupus in 1954.  While in Effingham, he met and married Lucy “Ellen” Wood, a registered nurse.  Their second son, Allen Drew, was born in October, 1956.
Ed decided he wasn’t quite done with schooling and the family then moved to Massachusetts to attend Boston University to work on his Doctorate.  Many happy years were spent pastoring churches all around Massachusetts, including First United Methodist Church of Westboro, West Chelmsford UMC and Quinsigamond UMC.
In 1963, Ed was called back to Illinois to serve at First United Methodist in Carbondale.  Their second daughter, Leigh Ellen, was born in November 1964.  They moved to Bloomington to serve at Wesley UMC, then Galesburg to become District Superintendent, and finally to Wesley UMC in Macomb, IL.  Ellen worked alongside Ed at all of the pastorates, as well as having her own career as a registered nurse at various hospitals and nursing homes.
Finally Ed and Ellen semi-retired in Albuquerque, New Mexico, but Ed continued to preach and hold small parishes in the area.  After 22 years in Albuquerque, Ed decided to fully retire in Kansas City near his son Larry.  Ellen passed away in 2010 after many years with dementia.
Ed was a devoted husband, father and grandfather.  He enjoyed preaching and telling stories and wrote a book called “The Funny Faithful”, in which he tells about some of the amusing events during his 50 years in the Methodist Ministry.  He was a faithful servant to the Lord and we rejoice that he is united with Him in Heaven.  Ed is survived by his four children, Julia (Sitka, AK), Larry (Waco, TX), Drew (Auckland, New Zealand) and Leigh (Salado, TX).  He has nine grandchildren, six great-grandchildren and two great, great-grandchildren.