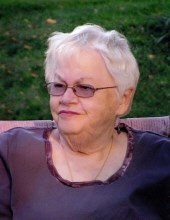 Services to Celebrate Elizabeth’s Life will be 11 AM, Wednesday, December 20, 2017 at Wesley United Methodist Church, Bloomington, IL with Rev. Vaughn Hoffman officiating. Private family interment will be at a later date. Visitation will be 4 – 7 PM, Tuesday, December 19, 2017 at the church. Calvert Funeral Home, Clinton, IL assisted the family with cremation rites.

Memorials may be directed to Heifer International.

Elizabeth graduated from Indiana State University in 1971 and worked as a Librarian for a short period of time. She was a member of Wesley United Methodist Church, Bloomington, IL. Elizabeth served on the Board of Education, Clinton, IL, was a co-founder of Countering Domestic Violence in McLean Co., IL, and a member of the United Methodist Women and P.E.O. She enjoyed reading, sewing, quilting, and photographing barns. Most of all, she loved spending time with her family.