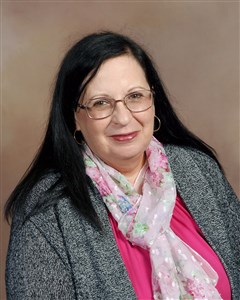 Pastor Eunice Rose (Edwards) Glasser, 67, of Bridgeport, IL, went home to be with the Lord on Thursday, April 28, 2022, at IU Health University Hospital in Indianapolis, IN, following a valiant fight with pulmonary fibrosis. She was born February 20, 1955, in Cleveland, OH, the daughter of Sylvester & Felicia (Coreno) Edwards, both of whom preceded her in death. She was also preceded in death by her brother, Frederick Edwards.

On December 8, 1981, she married Michael Glasser in Mount Vernon, IL, and they enjoyed 40 years of marriage prior to her passing. She is also survived by her son & daughter-in-law, Danny & Kristen Stanescu (Sumner, IL); her three grandchildren, Emma, Ava, and Alex; her sister & brother-in-law, Anna Jo & Ernie Haiman (San Diego, CA); her "honorary daughter", Carol Hawkins (Bridgeport, IL); as well as her fur baby, Myra Kay.

Eunice's road to the pulpit began with her 15-year tenure with the United Methodist Village in Lawrenceville, where she was the director of volunteer services and also served as the benevolent fund director. This role found her at churches throughout the region, and before long, she was pastoring the Ebenezer and Calhoun United Methodist Churches. Eventually, she ministered over the Parkersburg, Little Wabash Zion, and Ebenezer (Samsville) UMC congregations as well and was currently serving as the pastor of the Saint Francisville United Methodist Church.

It was evident that Eunice loved the Lord with all of her heart. This love couldn't help but spill out onto others and often looked like a warm smile, a thoughtful word, or a tender hug. Her gentle kindness and patient love were so often put on display as she served the bereaved at Glasser Funeral Home, which she co-owned and managed alongside her husband. They were, by any and all accounts, soul mates. Their partnership was all-encompassing and was a beautiful picture of Christ and His Church.

Though we grieve, we do not grieve as those without hope. On the contrary, we are assured that on Thursday, Eunice was met with the words, "Well done, good and faithful servant!"

A time of visitation will be held from 1:00-2:00 p.m. on Tuesday, May 3, 2022, at the Saint Francisville United Methodist Church (525 Main St. Saint Francisville, IL 62460). Funeral services will immediately follow and be held at 2:00 p.m. on Tuesday, with Rev. Harold Quick officiating. Burial will be in the Zion Cemetery, rural Lawrence County, IL. In lieu of flowers and gifts, it is requested that memorial contributions be made to the "Saint Francisville United Methodist Church", with envelopes available at the church. Goodwine Funeral Homes are assisting with the service.