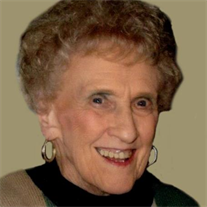 Evelyn was born December 8, 1925 in Mill Shoals, IL the daughter of William and Emma (Funkhouser) Toombs. Her mother Emma Louise passed away when she was four years old. Her father, William O. Toombs married Mary Weatherford who helped raised Evelyn and her siblings. In 1944, she married Leslie C. Pruehsner of Nashville, IL. They were married seventy years. Leslie passed away in April of 2015 at the Anna Veterans Home.

She was a 1944 graduate of Anderson High School in Anderson, IN. She attended college for one year. Evelyn was a minister’s wife and a great mother to her three girls. Through the years there were many moves to different churches. She also worked 36 years at hospitals, 25 years at Mulberry Manor in Anna, 10 years at Target in Florida. She retired at the age of 86.
She attended Tamms Methodist Church. Her church family were very special to her. She loved and served the Lord.

She has lived at the Union County Nursing Home in Anna since July1, 2016. She was provided with the best quality of care there. She loved them all as family. The family would like to say a special Thank You to everyone at Union County Nursing Home for keeping her comfortable and giving her such great love and care. A special Thank You to Celtic Hospice Care for their loving and compassionate care.

Funeral services will be held at 1:00pm on Wednesday, November 2, 2016 at the funeral home with Rev. Brent Gordon, Rev. Les Sinks and Jimmy Keller officiating. Interment will follow at Anna City Cemetery.

Memorial contributions may be made to Tamms Methodist Church or Preacher’s Aid Society & Benefits Fund and will be accepted at the funeral home.


To view the full obituary or to leave an online condolence for the family visit www.crainsonline.com