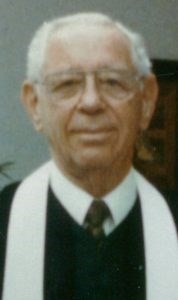 Reverend Doctor Floy J. Ekin passed into his eternal life June 19, 2017. In a career in the United Methodist Ministry that spanned nearly fifty years, Dr. Ekin served churches throughout the Central Illinois area. During his active ministry, Dr. Ekin performed 564 baptisms, nearly 400 weddings, officiated at 600 funerals, and preached nearly 1300 sermons. But more than anything else, he is remembered for the acts of kindness and caring he extended.
Floy Ekin volunteered for military service a few weeks after Pearl Harbor and served in the Pacific Theater until the end of war including the Army of Occupation in Japan. He received an honorable discharge with the rank of Sergeant.
He attended Illinois State Normal University (now ISU) and was active in the Wesley Foundation where he met his future wife, the late Marian Louise Dean Ekin. They were married in July 1949. Following his graduation from ISU, Floy attended Garret Theological Seminary of Northwestern University. After completing his seminary studies, he received his Elder’s ordination in 1953.
Dr. Ekin served churches in Stockland, Decatur Grace, Weldon, Peoria First, Gibson City, Shelbyville, and Jacksonville Grace. In 1969 he was appointed Superintendent of the Galesburg District of the Central Illinois Conference with supervisory responsibility for 109 churches. (This area is currently known as the Spoon River District of the Great Rivers Conference.) After completing his term he served Mattoon First and Quincy Vermont Street before moving to Florida where he worked in a part-time capacity for Heritage United Methodist Church in Clearwater, Florida.
Dr. Ekin was active in a number of the church’s Boards and agencies, and served ten years on the Conference Board of Ministry. He also directed conference youth camps for eight years, and was twice elected Delegate to the United Methodist General Conference, the denomination’s highest legislative body. Dr. Ekin also served on the MacMurray College Board of Trustees and was awarded an Honorary Doctorate from that institution.
Surviving family members are: Helen (sister) and Ronnie (brother) and his wife Erma; son Larry, his wife Houzama and their son Lawrence; son David, his partner Roxann Mayros and her daughters Toni and Lauren; daughter Lynndel Messmore, her husband Mark Messmore and their son Nathan and his partner Sarah Hall and her son Connor; and, daughter Karen Cooley along with her husband Charles Cooley, their daughter Stephanie, her husband Andrew Ritggers and their daughters Alana and Eden; their son Adam, his wife Danielle and their son Chase and daughters Addison and Tessa.
Other special relations include his “adopted” family, the Don Hill family of Clearwater Florida, and the hundreds of parishioners who blessed his life.
The family requests that memorials be made to one of the following:
Preacher’s Aid Society and Benefit Fund
P.O. Box 19207
Springfield, IL 62794