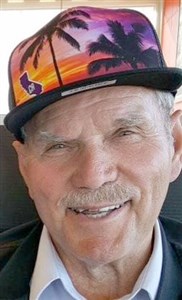 James Owen Medlen, 87, of Monticello, crossed over into heaven on Friday, May 6, 2022, at the Piatt County Nursing Home.

He was born on May 15, 1935, in Pinkstaff, the son of Owen and Eva (Haffield) Medlen. He married Judith Fay Barcroft on Dec. 26, 1965, at May Chapel United Methodist Church in Lawrenceville. They were married 56 years at his death.

Jim’s niece wrote of Jim: “Jim has several nieces and nephews whom he loved dearly. As his family and his sibling’s families have grown, he was blessed with knowing them and sharing his love and smile. They in turn all love their Uncle Jim.”

Jim had a great love for the oil field. He began working in this profession from age 17 and continued for more than 40 years. Much of this time was spent as a Driller on a “Spudder” rig. Jim served as a United Methodist Minister for 26 years in the Illinois Great Rivers Conference at many churches throughout Southern Illinois. Later Jim owned and operated a painting and home remodeling business and continued this work throughout retirement. Jim was a lifetime member of the American Legion. Jim was a Veteran of the Armed Forces, serving in Korea and later in the Army Reserves. Jim enjoyed the hobby of learning to be a “Blacksmith” and he “forged” many gifts for his family. A great source of happiness to Jim was the home he shared with Judy in Pinkstaff, in retirement.

Jim’s sister remembers from a young age he began to work to help support his family and gave his paycheck to his mother for anything they needed. He continued this into adulthood and during the years he was in the Army.

im’s daughter remembers her father: “He loves his entire family and so many others with his whole heart. His love for his Lord lives on in each of us, as heaven gains an amazing servant with a job well done. We will miss his big smile, his true enjoyment of labors and fulfillment of accomplishment as well as his constant sacrifice of himself for anyone in need. God always had him, yet now he lives forever.”

One of Jim’s beloved hymns was “Mansion Over a Hilltop” by Ira Stanphill. He lived his life to bring others to Jesus Christ. He leaves us with three passages of scripture; 2 Corinthians 5:17, Galatians 5:22, and 1 Peter 1:3-12.

A graveside service will be held for the family at Derr Cemetery in Pinkstaff. A date is not yet determined.

In lieu of flowers memorials can be made to the Piatt County Nursing Home in Monticello, and the Preachers Aid Society and Benefit Fund in Springfield.

Condolences may be sent to the family at www.mackey-wrightfuneralhome.com.