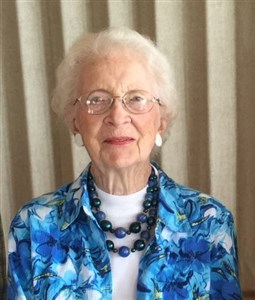 Joan earned her Bachelor of Arts degree from Illinois Wesleyan University in 1947. She was named to "Who's Who Among Students in American Universities and Colleges." She worked for the Central Illinois Conference of the United Methodist Church for many years and finished her career at the Illinois office of the Disciples of Christ Church, retiring in 1987.

She married Maurice Willis, the long-time love of her life, in 1985 in Florida. He was a professor of brass instruments at Illinois Wesleyan University.

Mrs. Willis was a patroness for the Sigma Alpha Chapter of Sigma Alpha Iota at Illinois Wesleyan for over 50 years. She often attended concerts at the SAI House and on campus as well as other venues in the Bloomington-Normal area. She regularly attended IWU Homecoming activities. She was a lover of classical music and a huge supporter of the fine arts. Joan was also a member of Kappa Delta Sorority and was active in its alumni group for many years.

Joan was a founding member of Chapter LO of P.E.O. She was a life-long active member of Second Presbyterian Church of Bloomington and was active in the JOY Group and women's circles. She and Maurice attended both the Wesley United Methodist Church and Second Pres. worship services.

Mrs. Willis was the center of a close-knit group of IWU Summer Music Camp counselors. Her late husband directed the camp for over 30 years. The group met annually for many years, enjoying memories of "days gone by." One of these gatherings gave birth to the annual "Maurice M. and Joan S. Willis Endowed Music Scholarship" for a deserving Illinois Wesleyan music student.

Relatives and close friends will gather at Park Hill Cemetery, 1105 S. Morris Avenue, Friday, October 9, at 1:00 p.m. for a brief graveside service. Masks and social distancing will be required at the cemetery.

"Joanie," as she was fondly called, was a very social person and was always ready with a smile and a laugh with those around her. She enjoyed being "on the go" and eating out. God's new angel will be greatly missed by her family and friends.

Mrs. Willis was a descendant of Major General Charles Edward Hovey, the first President of Illinois State University and Civil War veteran of the 33rd Illinois Volunteer Regiment. She fondly remembered attending the dedication of Hovey Hall at ISU.

She was preceded in death by her parents, her brother Donald Hovey Straight, and her husband.

Joan is survived by several cousins in Illinois and Kentucky and her long-time Bloomington friends, Tom and Judy Merritt.

Memorials may be made to the Maurice M. and Joan S. Willis Endowed Music Scholarship at Illinois Wesleyan University or the Community Cancer Center.