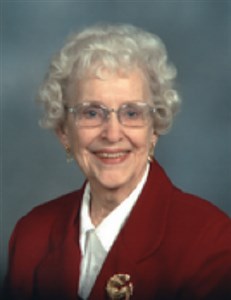 Katharine Guither was born in Quincy, March 18, 1921, the daughter of the late Drs. Herman A. and Flora Elise Kaempen Wendorff. Her maternal grandparents were the late Mrs. and Mrs. C. W. E. Kaempen, one of the foremost building contractors of Quincy, and Mr. and Mrs. Louis Henry Wendorff, long-time prominent merchants of Barry, IL.

That fall Katharine enrolled as a freshman student at MacMurray College, Jacksonville, IL. She attended Quincy College as a sophomore. She was a member of the social sorority Phi Kappa Chi and also a member of Quincy College Drama Club. Katharine took part in Romeo and Juliet as the mother of Juliet. In other plays she worked backstage and with costume design.

After college graduation, Katharine and her Carthage college roommate, Harriet Heins, went to Chicago for employment. Katharine became a manager-adjuster in the complaint department of the shoe division at Montgomery Ward Catalog Company. She and Harriet used their year in Chicago much to their advantage. They made many trips around the city, seeing the many museums, listening to the lovely music at Ravinia, attending quite a few of the plays in the city, and exploring in general.

On October 23, 1943 she and Robert Mensendick, also a graduate of Carthage College, were married at the First Presbyterian Church of Quincy. Robert was serving in the United States Army assigned to the medical unit at Camp Forrest, Tennessee. Soon, Katharine found employment with the Quartermaster Department at Camp Forrest. The next year Robert was moved to The Army War College in Washington, DC and she accompanied him and continued her employment in the Quartermaster Department.

On September 20, 1944 a son, Robert Grant Mensendick, Jr. was born to them at the Women's Hospital in Washington, DC. They lived on the post of the Army War College until Robert Sr. received an honorable discharge from the service in 1946. At that time the couple moved to Kokomo, IN for four years. Together they were active members of the Grace United Methodist Church in Kokomo where she was a member of the United Methodist Women, served on church committees, and both were charter members of Kokomo Ballroom Dance Club and several bridge clubs.

In 1948 the Mensendicks returned to Carthage where they became members of the Carthage United Methodist Church. Katharine was very active in the church, serving as Nursery Home Visitor, Children's Sunday School teacher, the Mission Committee, and the Pastor-Parish Committee.

Their son joined the Boy Scouts and Katharine soon happily found herself a Den Mother for three years. Volunteering as a Gray Lady at Memorial Hospital was also enjoyable for several years.

She was co-owner with her husband in Mensendick Hardware for twenty years from 1950 to 1970.
In 1954 a daughter, Kathie Ann Mensendick, was born in Carthage at the Memorial Hospital in Carthage. Six years later Katharine began the delightful job of troop leader of Carthage Girl Scout and Brownie troops for six years.

Her family came first. Always interested in seeing the children participating in all the regular school activities, both Katharine and Robert regularly attended the various school functions. As the children grew, she made room for other activities. She served as Room Mother in Lincoln School, when both Bob, Jr. and Kathie were students. She became a member of Shadrach Bond Chapter NSDAR, Carthage, IL in January 1970. She served in all offices of the Chapter and as Chapter Treasurer for ten years also on many of the committees.

After closing their Hardware store in 1970, Katharine soon tired of staying home. She was employed by Memorial Hospital as secretary in the out-patient department, then as secretary in the office of Dr. Vasant Pawar, MD. In 1975 she began full time work in the Hancock County Superintendent of Schools office as Office Manager and Secretary to Dale Heagy and Jack Pickard for a total of nine years. She and Robert, Sr. both retired in 1984.

Robert's and Katharine's two children graduated from college. Robert Jr. attended Hannibal-
LaGrange College then Gem City Business College. While he was at Hannibal-LaGrange he met Diana Vaughan. They were married in 1965. Diana went on to Missouri University, majoring in chemistry. Robert Jr. entered the U.S. Army and served in Libya and the United States for four years. Diana and Bob Jr. are retired and now reside in Bowling Green, MO.

Kathie graduated from Illinois Wesleyan University and, after teaching music in grades Kindergarten thru High School in Buda-Sheffield, IL, she attended Northwestern University in Evanston, IL. She graduated as an ordained United Methodist minister from Garrett Evangelical Seminary in Evanston. While attending seminary, Kathie met John C. Hostetter. He had graduated from Evansville Indiana University and from Northwestern University's Garrett Evangelical Seminary. He, too, became an ordained United Methodist minister. They were married in Carthage in July 1980 by Rev. Francis Geo. Guither who was serving as pastor of the Carthage United Methodist Church. They have two children. Their son Stephen, a graduate of Manchester College in North Manchester, IN is presently serving as branch manager of Bailey & Wood Financial Group in Auburn, IN. He and his wife Mary, have a daughter, Sarah Louis, born February 20, 2018 and a son Gabriel James, born July 13, 2020. Their daughter Anne, a graduate of Purdue University in Lafayette. IN, and her husband Michael Valentine live in Taylor Lake Village, TX with a pair of delightful twins, Katherine Elizabeth Valentine and Michael Anson Valentine who were born July l8, 2007.

In 1979 Katharine joined Carthage Woman's Club and served in all offices. She became a lifetime member of Good Samaritan Home Association of Quincy in 1985; a member of the Carthage Grace Chapter #67, Order of the Eastern Star; and a nine-year member of Retired Senior Volunteer Program, Carthage. Robert passed away in 1989.

July 16, 1995 in the Carthage United Methodist Church, Katharine married widowed Rev. Francis Geo. Guither, retired United Methodist Church minister living then in Macomb. He had performed the wedding ceremony for Rev. Kathie and Rev. John Hostetter exactly 15 years before in the same church. They returned to Carthage from Indiana and officiated at the wedding of her mother Katharine and Francis.

While living in Macomb, the Guithers were members of the Wesley United Methodist Church. She became an associate member of General Macomb Chapter NSDAR, and a member of several bridge clubs.

In 1999 Rev. and Mrs. Guither sold their lovely Macomb home and moved into a beautiful cottage of Good Samaritan Home of Quincy. In Quincy they joined Vermont Street United Methodist Church, members of and actively served with the Quincy RSVP. Katharine joined the Quincy Women's City Club where she enjoyed the friendship of many Quincy women and served as a member on the Board of Directors and a member of a number of bridge clubs in the city.

Katharine and Francis found much enjoyment in their many travels. They visited every one of the 48 "lower" states, which added up to more than 90,000 miles in their first ten years or marriage. They added miles flying to Alaska, cruising to Nassau in the Bahamas, to the Canadian Maritime Islands, to Jamaica and to Grand Cayman Island in the Caribbean and Cozumel, Mexico and down the inside passage from Alaska to Victoria, Canada. Other trips were made by automobile and train. They enjoyed driving up into Canada, down into Florida and along both seacoasts. Their snapshots and video pictures taken during all their trips have given them happy moments to remember. Besides traveling, Katharine enjoyed her bridge clubs, reading, watercolor painting and needlework. She delighted in "manufacturing" greeting cards on her computer, sending birthday, anniversary and get well wishes to her many friends all over the country.

Due to Covid-19, a private celebration of Katharine’s life will be held by the family at a later date.

To send flowers to the family or plant a tree in memory of Katharine Wendorff Mensendick Guither please visit our Tribute Store.
Obituaries