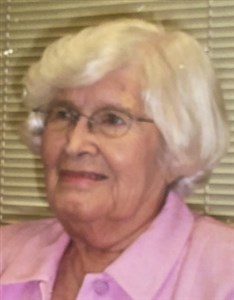 Marie (Schnake) White Webb, 99, died peacefully at Claridge Court, Prairie Village, KS, on May 18, 2020. She was born March 28, 1921, in Washington County, IL, to a young farmer and his wife, Harlan and Nettie (Whittenberg) Schnake. After graduating from Centralia High School, she forfeited her county's full-tuition scholarship to the University of Illinois, where she had intended to major in journalism and dress design, to enroll in Asbury College, Wilmore, KY, for a major in Christian Education. There she met a young student minister, James Kerr White, whom she married August 28, 1940. After being chosen for "Who's Who Among Students in American Colleges and Universities," Marie dropped out of school to go with her husband to student church appointments as he completed his theological degree at Drew University in New Jersey and Garrett Theological Seminary at Northwestern University. The couple served churches in Lovington, Griggsville, Quincy, East Peoria, and Pekin, plus six years on the Bloomington, IL, Districtall in the Central Illinois (now called the Great Rivers) Conference. Marie became very active in community and conference activities as well as in the various churches. Always a lover of children, she taught Sunday School to children and youth, and she organized several young adult singles classes. She was a Girl Scout leader and board member, directed Girl Scout day camps, and served on boards of the YWCA and PTA. She was active in many units of United Methodist Women, and she chaired the Conference Ministers' Wives Retreat and was president of the Ministers' Wives Association. After her youngest child entered kindergarten, Marie went back to school, completing her B.A. at Bradley University. In 1970, she earned a master's degree with honors in U.S. History at Illinois State. After spending many hours in her denomination's archives, her thesis"Antislavery Leadership in Illinois Methodism, 1844-1861"was accepted. This led to the publication of an article, "The Methodist Antislavery Struggle in the Land of Lincoln," in Methodist History, July 1972. It also led to her appointment to chair the Commission on Archives and History, being the first woman to chair a commission in conference history. She wrote the readers' theatre script, "Flame in the Wilderness," for the conference sesquicentennial celebration, June 1974. When living in Pekin, home of Senator and Mrs. Everett M. Dirksen, Marie helped organize the Dirksen Congressional Research Center and served as program and exhibit director. She wrote curriculum materials, such as "How a Bill Becomes Law," speaking to many school groups. In 1982, the YWCA honored her as outstanding woman in the professions. When her husband retired in 1983, the couple moved to Enid, OK, where for seven years Marie edited the newsletter of First United Methodist Church and organized an older adult council. The "Keenagers" planned trips together, visited the homebound, and engaged in Volunteer in Mission trips, such as to Bolivia and other sites. The highlights of her life, however, were created by her four children, all of whom grew up, completed college degrees, and married. In her spare time, Marie's hobbies included reading, writing, camping, sewing (her own clothing as well as that of her two daughters including their wedding gowns), and making wedding quilts for her grandchildren. She became a hands-on grandmother and great-grandmother, too, organizing picnics, family reunions and holidays, camping and vacation trips, shopping jaunts, and milestone celebrations. Even as she aged, the focus of her telephone conversations was always the interests and activities of the various families' children, and she was so proud of them. Marie lost her husband in 1990 after almost 50 years of marriage. The following year, she married retired Bishop Lance Webb, who had served Methodism in Illinois. They lived for the last five years of his life in Dallas and northwest Arkansas on Beaver Lake. After his death in 1995, she began to write for publication by the Methodist Publishing House: The Power of the Dream: Looking Forward in the Later Years and Building a Ministry for Homebound and Nursing Home Residents. She served on the faculty at Mount Sequoyah in Fayetteville, AR, a retreat center of the South Central Jurisdiction. She was the Jurisdiction's representative to the national Committee on Older Adult Ministries for eight years. In 2000, she moved to Kansas City. Surviving are her four children and their spouses: Jeanie (Douglas) Amman, Muncie, IN; Peggy (Stephen) Harmon, Overland Park, KS; Steven (Staci) White, Brooklyn, NY; and John (Viqui) White, Swan's Island, ME. Also surviving are 14 grandchildren: Mark Amman, Kirk Amman, Jill Amman Lafferty, Drew Amman, Gwen Amman Burns, Joyce Witherspoon Kindt, Jamie Montgomery Helzberg, Todd Montgomery, Braden Harmon, Megan Harmon Straney, Riley White, Justin White, Taylor White, and Mei Mei White. There are 29 great-grandchildren, six of whom are twins. Also surviving are three stepdaughters: Jeanne Davis, Mary Edlund, and Ruth Lindstrom. Preceding her in death were Robert Montgomery, son-in-law; Bret Amman, grandson; and brothers Wilfred and Eugene Schnake. The family is grateful to her longtime physician Dr. Peter Holt and the skilled care team at Claridge Court for their compassion and dedication to her welfare. Because of current restrictions, Marie's life will be celebrated at a later date at the Wesley Covenant Chapel of the United Methodist Church of the Resurrection in Leawood, KS. Private graveside services will be held at Memorial Gardens in Enid, OK.