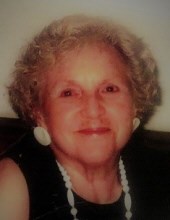 Mary Brownfield, 93, of Carlinville, IL, formerly of Peoria, passed to her heavenly reward on Sunday, February 10, 2019, with her daughter at her side. Mary suffered a fractured hip in December and was not able to return to her previous state of health.
Mary was born on August 31, 1925, in Peoria, IL. She was the sixth child born to Fred and Mary (Rauschkolb) Demmin. She lived in Peoria all of her young life and attended Manual Training High School. She married Richard C. Brownfield on June 7, 1947. Following their marriage, she and Dick began serving United Methodist churches in central Illinois. Those churches were in Hamilton, Decatur, Villa Grove, Galva, Carlinville, Charleston and Normal. Dick and Mary moved to Hondo, TX, in 1989 to be near their daughter and grandchildren. After a bicycling accident, they returned to Illinois in 2006.
Mary was a devoted preacher's wife, assisting with many church functions, including singing in the choir. She had a beautiful voice and sang in choirs all her life. She was a homemaker until her children were older, when she attained an Associate Degree in Child Development and worked as a Child Care Provider. Mary loved flowers, gardening, studying maps, reading and the church. She taught Sunday school, and was devoted to Bible Study all her life. In their retirement, Dick and Mary delighted in travel in the U.S., Europe and Africa. They enjoyed bicycling, especially on their bicycle built for two.
Mary and Dick had 3 children. Mary Susan and Dick passed away as young adults. One daughter remains, Jane (Scott) Reichmann of Carlinville, IL. She is also survived by 2 grandchildren, Dinah Jane Hutson of San Antonio, TX, and Luke Hutson of Austin, TX; a sister-in-law, Suzanne Adams of Amery, WI; and many nieces and nephews.
There will be a celebration of life at Heritage Manor in Carlinville, IL, on Friday, February 22, 2019, at 2:30 p.m. in the dining room. Interment will be at a later date in the spring.
Heinz Funeral Home is in charge of arrangements.
Memorials may be made to the The Preacher's Aid Society of Illinois, Carlinville United Methodist Church or St. Jude's Hospital for Children.
Please visit heinzfuneralhome.com to leave condolences.