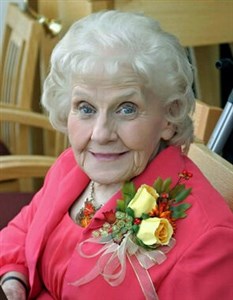 Myrthel E. Green Bula Hertz, 93, of Terre Haute, passed away June 13, 2019, at Springhill Village. She was born on January 3, 1926, to George Green and Ada McCullough Green in Fairbanks, Indiana.
Myrthel is preceded in death by her parents; first husband, the Reverend Ronald Bula; second husband, Orville Hertz; brothers, William Green, Howard Green, Paul Green and Walter Green; and sisters, Mable Budd, Nellie Green, Ruth Green, Hazel Green and Jessie Green; as well as her great-grandchild, Esther Cunning. Myrthel is survived by her children, Cindy (Bula) and Dale Zorn of Ida, Mich., Steve Bula (Teresa) of Decatur, Ill., and Matt Bula (Rita) of Terre Haute; sister-in-law, Sandy Green; stepchildren, Linda Abee (Jerry), Barbara Willis (Steve) and Joyce Erikson (Terry); and 15 grandchildren; as well as 14 great-grandchildren.
Myrthel and her husband Ron served 10 different appointed churches. Myrthel was a member of Breden Memorial United Methodist Church. She was very active in the church. Myrthel did a lot of plays and puppetry for the kids. She was always helping the children, with Bible study and Sunday school. She was a member of the choir and played the piano. Myrthel was a great cook and loved her garden. She also enjoyed painting, drawing and writing poetry. Myrthel was the ideal pastor's wife. Myrthel's motto was: In life, a servant of Jesus; in battle, a dedicated warrior; in God's will, a prisoner.
Visitation for Myrthel will be held on Sunday, June 16, at DeBaun Springhill Chapel, from 4 to 8 p.m., and Monday, June 17, from 10 to 11 a.m., with services starting at 11 a.m. Burial at Grandview Cemetery will follow. In lieu of flowers, the family asks that donations be made to either Breden Memorial United Methodist Church or Go International Missionary Service of Wilmore, Kentucky. Online condolences may be left at:
www.DebaunFuneralHomes.com