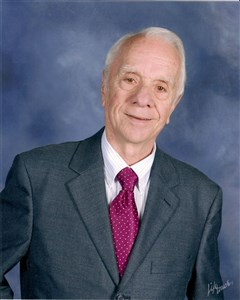 The Reverend Ned W. Hawbecker, 82, of Decatur passed away on Friday, September 9, 2016 at Decatur Memorial Hospital.

A service to celebrate and honor Reverend Ned’s life will be held at 11:00 a.m. on Tuesday, September 13, 2016 at First United Methodist Church, Decatur. Visitation will be from 9:00 a.m. until service time. He will be laid to rest at Boiling Springs Cemetery. Memorials can be made to the Garrett Evangelical Theological Seminary c/o Hawbecker Scholarship Fund.

Ned was born on June 12, 1934 in Aurora, IL the son of Alfred and Bessie (Hubert) Hawbecker. He graduated from Naperville High School and then also from North Central College. Ned then went on to Garrett-Evangelical Theological Seminary before his missionary in Kobe, Japan for three years. He married Susan Lawson on June 26, 1965. He also participated in a pulpit exchange in Barnstable, England. He served various churches in Illinois Great Rivers Conference and also served on committees of United Methodist Church on the district and conference levels. Ned served on the District Missions Chair, Conference Board of Global Ministries and Conference Board of Ordained Ministers. Ned was a proud member of Kiwanis International for 30 years serving as Lt. Governor of Division 27. He volunteered and served on the Board of Directors for the Habitat for Humanity and also volunteered for the Red Cross Blood drives. Ned was a court appointed advocate for CASA as well. After retirement he became very fond of restoring and repairing old clocks in his spare time.