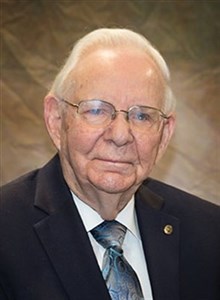 Raymond Paul Sims died on Sunday, June 3, 2018 at his home in Rochester.  Paul was born on September 10, 1926, to Herman and Mabel Sims in Marion, IL.  He married Jeanne’ L. Seale on November 3, 1951.  She survives him, as does two daughters, Carol Sims and Cathy Sims Norgaard, three grandchildren, Michael, Deanne, and Stephen Norgaard, and two great-grandchildren, Terrali and Nolan.  He is also survived by a brother, G. William Sims, of Florida.

Rev. Sims was a minister in what is now the United Methodist Church since 1944, licensed at the age of 16 and appointed three small churches while still in school.  Soon thereafter he was one of 13 youth delegates chosen nationally to attend the interdenominational, ecumenical, youth conference in post-war Oslo, Norway, and a work camp experience in Poland in 1947.

He attended SIU-Carbondale and then McKendree University for his bachelor’s degree. He taught in mission schools in Hirosaki, Japan, for three years.  He served on the executive committee for World Methodism for three terms with major conference events in Hawaii, Kenya, and Singapore.  He graduated from Candler School of Theology at Emory University in Atlanta before coming back to Illinois to serve churches at Fairview Heights, Chester, DuQuoin, and Granite City.  He then served the lower 13 counties in Illinois as a District Superintendent before becoming the Assistant to the Bishop in Springfield.  Following that term, he served the Effingham Centenary UMC until his retirement in 1996.

He was awarded a Doctor of Divinity from McKendree and a Doctor of Humane Letters from Wiley College. He was also chosen Outstanding Alumni in Ministry from McKendree at their sesquicentennial.  He was a loyal member of Rotary International, with 50 years of perfect attendance, and received three Paul Harris Awards, and most recently “Person Who Makes a Difference” from the organization.

Since retirement he has continued to serve God and the United Methodist Church with eight short and long term interim pastorates in and around Springfield, as well as visitation work.

He was devoted to God, his family, and the church.  He was greatly loved, highly respected by all, and will be greatly missed.